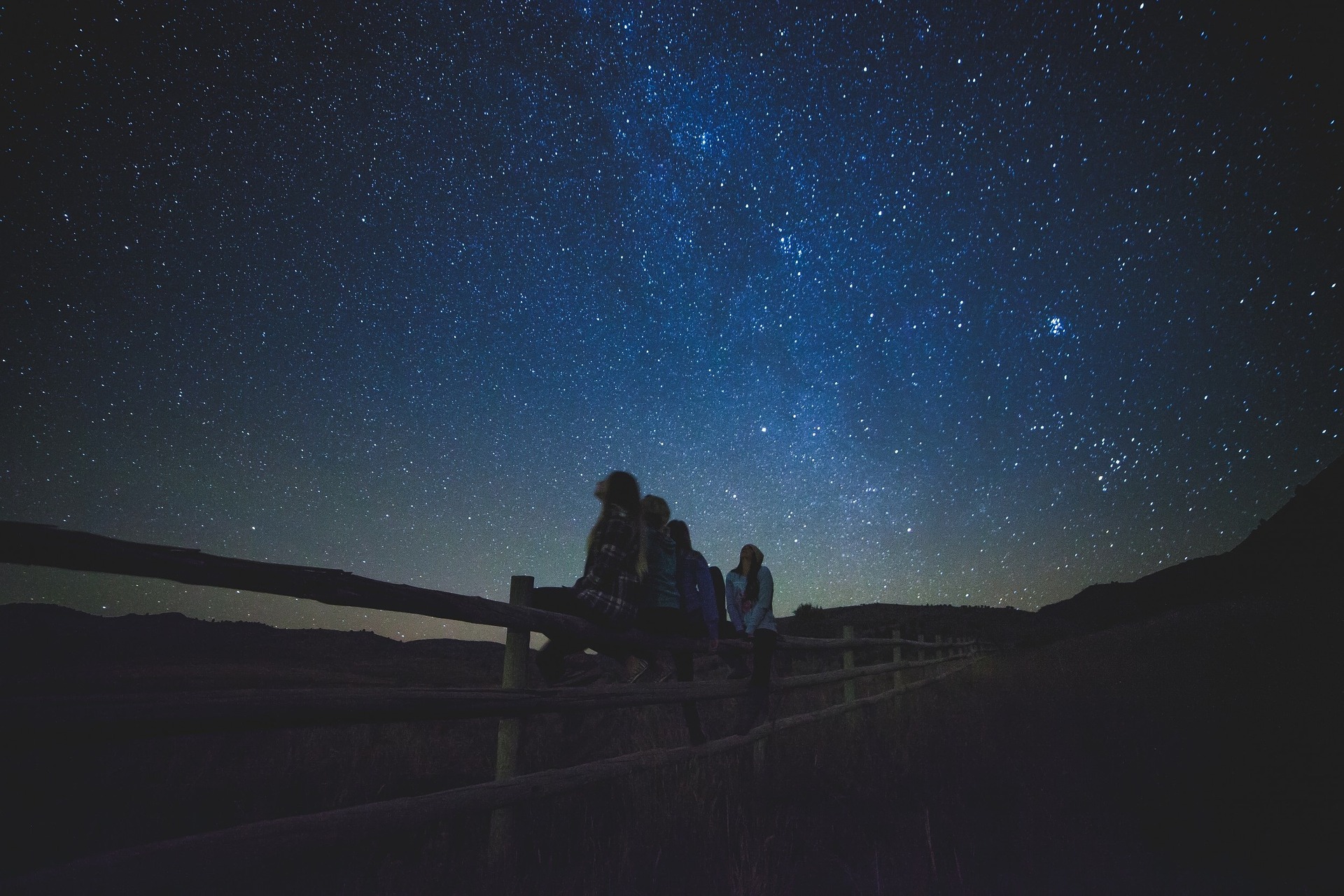 Imagine walking into your backyard at night. You look up at the sky and see the stars, maybe the Moon if it’s up. Can you identify at least six constellations? What about the North Star? Are there any visible planets? Would you even know if there were?

I recently started a survey (CLICK HERE to take it) about this. So far, only 13% of respondents said they could identify six consetellations and find the North Star. When asked if they wished they could do so, 100% of them said that they did. Most said their biggest stargazing frustration was not having or making the time to do it.

We are experiencing a unique time in history and most of us have disrupted routines, cancelled events, and kids not in school. This is a great time to slow down and take advantage of the extra time to learn something new while connecting with the night sky.

By the time you are done reading this, you will be ready to find eight things (plus a few bonuses) in the night sky by 8:00 PM. Without a telescope and without binoculars, although those can certainly enhance the experience.

Instead of switching on all the house lights as it starts to get dark, let it get dim in the house. Choose a few smaller lights to help you find your way around or put dimmer switches on their lowest setting. This will make it easier to see the stars once you go out. Some of the constellations mentioned here will be easiest to find at 8:00 PM at the end of March and a couple of weeks into April.

You don’t need any equipment at all, although a couple of items can make it a bit easier. Get a red flashlight, or cover a regular flashlight with a red film or cloth. This will have less of an impact on pupil constriction, which you want to avoid. If you want to stay outside for a extended amount of time, lawn chairs or a blanket will make it more comfortable.

Choose a location in your yard that gives you the widest view of the sky, especially from East to West. If your yard has too many tall trees or buildings that limit your view, consider going to a park or driving to the top of a hill where you can see more sky.

Avoid turning on your phone screen. The blue light emitted from it will constrict your pupils and make it difficult to see the great stuff that’s up there.

Stand looking directly to the South. This is your orientation point to begin your journey across the sky.

While facing South, turn your eyes toward the Western sky. The first thing you’ll notice prominently is probably that super bright star. It’s actually not a star at all. It’s Venus. Did you know Venus displays phases just like our Moon? This is a result of being closer to the Sun than us. Over the upcoming weeks, it will be about half-illuminated, but it will still be bright for viewing with the naked eye.

Orion is probably the most recognizable constellation in the Northern Hemisphere and is still visible in the early evening at the end of March. We’ll use this constellation to get oriented with the other constellations you’ll see. Stand facing South. Then look for Orion toward the West.

Orion’s belt is the straight row of 3 stars that make him easy to find. If you’re lucky to be away from heavy light pollution, you can see is “dagger”, a series of 3 fainter stars that hang below his belt. If you have a telescope, fix it on the middle of those 3 dagger stars for a spectacular view of a beautiful nebula. It will will look like a faint bluish cloud with bright, sparkling stars around it. This is where new stars are forming, like a “star nursery”.

Canis Major, or the Big Dog, sits faithfully near Orion’s feet to the East of the hunter. He’s easy to find because Sirius, the brightest star in the sky (remember, Venus is not a star) makes the eye of Canis Major. Sirius is also known as the Dog Star and is tied to the hottest days of summer, or the “dog days of summer”, thanks to the ancient Egyptians. They thought the rising Sun at the same time as the rising Sirius was a merging of their combined heat to create miserably hot conditions on Earth.

If you look a smidge to the Northwest of Orion, you will find a faint V-shape that is part of Taurus, the bull. The brightest star with its reddish hue is Aldebaran. It is the eye of Taurus, and gives an air of mystery and imagination to this constellation.

Pleiades is a star cluster rather than a constellation, but it is one of the best known star clusters and is super easy to spot with the naked eye. Many people unfamiliar with the night sky mistake it as the Little Dipper. It is located a little to the Northwest of Taurus and is a clump of bright stars shaped like a miniature dipper. This star cluster has always had a sacred meaning to ancient cultures and mythologies. Many refert to it as the Seven Sisters from mythology.

Looking East from Taurus (Northeast of Orion), you can easily spot the twin stars that make up the heads of the twin brothers in the constellation Gemini. These stars are called Castor and Pollux, (remember the brothers by these names in Hunger Games: Mockingjay?).

Just east of Gemini is the constellation Cancer. It is made up of fairly faint stars that are easier to see from a dark location.

Yet farther to the East is Leo, the enormous lion in the sky. The easiest way for me to find him is to look for the triangle that makes up his back haunches. From there, it is super easy to trace out the rest of his body and head.

Now turn toward the North. You are going to spot the two most important “circumpolar” constellations. That just means they are the constellations that cirlce the celestial pole, which points to the North Star.

Ursa Major, the Big Bear, is also known as the Big Dipper. It is probably the first constellation you ever learned how to find as a child. It is visible all year, but can only be seen in the Northern Hemisphere.

Directly across from the open ladel of the Big Dipper is a constellation that looks like a jaggedy captial “E”. Or an “M” or “W” turned on it’s side. The Big Dipper and Cassiopeia do a circular dance around the North Star.

The North Star, or Polaris, is not the brightest star in the sky, contrary to popular ideas by those who don’t know the night sky. In fact, it can be difficult to find unless you know the trick to help you spot it easily. It is located almost exactly halfway between the Big Dipper and Cassiopeia. The image will help you find it easily.

So all in one night, you can spot 8 constellations, a planet, a major star cluster, and the North Star, all visible with the naked eye.

To make it more fun, you can expand your historical knowledge by learning the mythologies associated with these constellations. They are fascinating and give a glimpse into the worldview of ancient cultures around the world.