Asteroid Headed Toward Earth…Will It Hit? 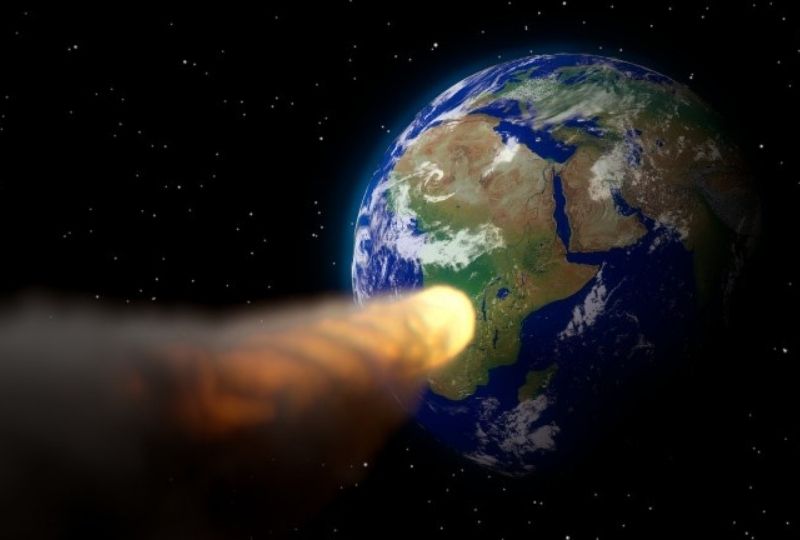 You might have seen it in the news lately: “Asteroid Headed Toward Earth One Day Before November Election.”

Are we in danger of the next mass extinction? Should we sell all we have and run up our credit cards because the end of the world is weeks away?

Let’s all take a breath and slow down.

NASA made the announcement recently that a “refrigerator-sized asteroid” is headed in Earth’s direction, making its closest approach on November 2, the day before our general election. Does NASA think we are in danger? Here is what they said:

“Asteroid 2018VP1 is very small, about 6.5 feet, and poses no threat to Earth. Scientists estimate it has only a 0.41 percent chance of entering our atmosphere. If it does, it will disintegrate due to its extremely small size.”

Whew! We can all breathe a sigh of relief.

IS IT AN ASTEROID OR A METEOR?

There are many terms used to describe the debris and rocks speeding through our solar system.

WHAT IF THE METEOROID HIT?

But what would it look like if the November meteoroid did enter our atmosphere and burn up? We know that most meteoroids are only the size of a grain of sand. Occasionally, we see a fireball zooming across the sky from a piece of debris about the size of a golf ball.

Let’s compare this 6.5-foot object with a recent massive asteroid event in Russia that was ten times larger.

Do you remember the Chelyabinsk meteoroid that hit Russia in 2013? That 66-foot meteoroid burned brighter than the Sun during entry, exploding at about 97,000 feet and creating a large shock wave. The energy released was 26-33 times greater than the bomb dropped in Hiroshima. About 7,200 buildings were damaged in six cities, causing injuries for about 1,200 people, but no deaths were reported.

Now you can see why scientists are certain that no harm will happen to anyone if this small November asteroid were to strike our atmosphere.

HOW COMMON ARE METEOROIDS?

Most people don’t realize it, but Earth is bombarded by more than 100 tons of dust and sand-sized particles every single day. About once a year, an automobile-sized asteroid slams into Earth’s atmosphere, creating a massive fireball and burning up before reaching the surface.

Now imagine an asteroid the size of a football field hitting Earth’s atmosphere. At this size, it won’t burn completely before descending to the surface of the Earth and can cause significant damage to the area. These strike the Earth every 2,000 years or so.

Objects that are large enough to threaten Earth’s civilization come along every few million years. Impact craters on Earth, the Moon, and other planetary bodies are evidence of these major events.

With so many meteoroids zipping past Earth all the time, NASA created a widget for curious people called Asteroid Watch. It displays the next 5 asteroids heading our way. You can also download an asteroid tracker app for your smartphone.

Geoff Notkin continues his work with meteorites through the organization he founded, Aerolite Meteorites, Inc. On his website, you can learn how to hunt for meteorites, get information about expeditions and research projects, get links for great documentaries and TV shows, and shop for fun items like chunks of meteorites and jewelry made from them.

There are 190 confirmed meteorite craters around the world and many unconfirmed craters. Some of them are worth adding to your astrotourism bucket list.

Meteor Crater near Winslow, Arizona is the best-preserved crater in the world, thanks to the dry climate. It is a mile wide and over 550 feet deep! The crater was created by a 160-foot nickel-iron meteoroid about 50,000 years ago. Scientists believe that half of it was burned up during entry into the atmosphere and the rest was mostly vaporized upon impact. This resulted in few remaining meteorites in the crater.

Visitors to the Meteor Crater & Barringer Space Museum can experience the outdoor observation trails, opt for air-conditioned indoor viewing, visit the interactive discovery center, try the 4D immersion experience, and take home something special from the gift and mineral shop. There is an RV park near the site. The area has exceptionally dark skies for great stargazing.

Vredefort Crater in South Africa is the largest and one of the oldest impact craters in the world. At the time of impact 2 billion years ago, the crater was 190 miles in diameter, though it is severely eroded now. The dome that was created by the rebound of the meteorite in the center of the crater is now a UNESCO World Heritage Site.

Visitors to the Vredefort Dome, just 90 minutes from Johannesburg, should hire a qualified guide for tours. There are also opportunities for hiking, camping, and hot air balloon rides. Although Johannesburg has some of the brightest skies in Sub-Saharan Africa, Vredefort Dome has much darker skies with great stargazing potential should you choose to camp in the area.

Monturaqui Crater is located in Atacama Desert in Chile. Formed by an iron meteorite less than a million years ago, it is 1,493 feet in diameter. Although the area shows evidence of the heat and pressure caused by the impact, nothing of the original meteorite remains. This is the location of one of the Meteorite Men episodes.

Visitors to Monturaqui Crater should start at the Meteorite Museum of San Pedro Atacama. Full day tours are available. (NOTE: Night Sky Tourist does not endorse any tourism companies at this time.) The area has beautifully dark skies for exceptional stargazing. In fact, Chile’s high elevation and dry climate make it an excellent location for pristine dark skies and is the reason the country has some of the most important research observatories in the world.

Kaali Crater in Estonia is one of the few impact events that took place in a populated area. Around the 4th century BCE, a large meteor broke into pieces at 30,000 feet and fell to the ground in multiple fragments. The impact incinerated forests within a 3.7 miles radius.

Today, we can see nine crater depressions. Kaali Crater is the largest and today is a beautiful little lake that has a long history as a sacred place. Archaeological evidence shows that this was a place of ritual sacrifice. The meteor event figures strongly into regional mythology.

Nordlinger Ries and Steinheim Craters in Germany were created around 15 million years ago by binary asteroids. The impact ejected the sandy surface up to 280 miles away from the impact site. Stone quarried for the many buildings in the area contain millions of tiny diamonds.

The city of Nordlingen was built within the crater depression over 1,100 years ago. It is one of only three German cities that still has completely intact city walls. Its more recent claim to fame was when it served as the filming location for Willy Wonka and the Chocolate Factory starring Gene Wilder. Visitors can start with a tour of the Ries Crater Museum.

There are many more impressive craters you can visit across the U.S. and around the world. See if there is one near any of your future travel destinations and get a glimpse into an ancient astronomical and geological event.