What the Heck is a Blood Moon? 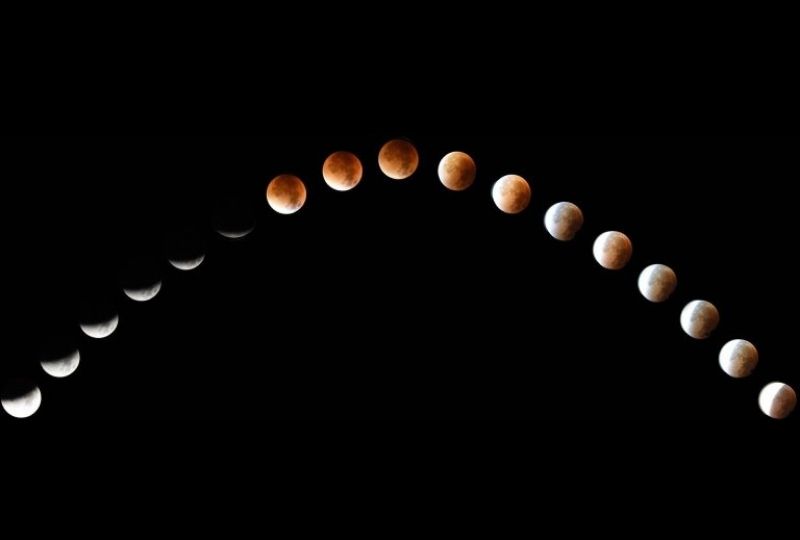 When a Full Moon travels completely into Earth’s shadow, we get a total lunar eclipse. Astronomers call it a Blood Moon. It may sound creepy, but it will be beautiful!

WHAT IS A BLOOD MOON?

What makes it a Blood Moon? On that night, there will also be a total lunar eclipse. This happens when the Sun, Earth, and Moon align in a perfectly straight line. This causes the Earth’s shadow to completely cover the Moon. As the light of the Sun hits the Earth, the red portion of the color spectrum bends the most, curving around the planet and still reaching the Moon that is hiding in the Earth’s shadow. The result is a noticeably red Moon, earning it the nickname of Blood Moon.

In historic times, most people around the world were skywatchers in some way. The night sky was important for knowing the seasons so they could plant and harvest crops at the proper time. It marked important dates for rituals, ceremonies, and celebrations. It told stories that held lessons for all the people of their culture. But it also held mysteries that produced ideas that we would call mythologies or folklore today.

In the ancient Inca Empire of South America, Mama Quilla was their Moon goddess. They thought a Blood Moon indicated that a jaguar was attacking her. Her blood would flow, turning the Moon red. The Inca would be as noisy as they could be, which would even get the dogs howling and barking. They thought this would scare the jaguar away. It worked, and the eclipse gradually disappeared and the Moon reappeared as the brightly shining Full Moon once again.

In Mesopotamia, the world’s oldest civilization, the people also thought the Moon was being attacked. They thought this put their king in danger of attack, too. Since they were able to predict Blood Moons with reasonable accuracy, they hid the king away in a safe and protected place while a substitute king was dressed up to take his place. After the eclipse, the king would emerge from hiding and resume his position as ruler of the kingdom.

In India, a Blood Moon brings ill fortune. The people cover their food and water to protect it and perform cleansing rituals for their own protection. Pregnant women avoid eating or doing housework so they can keep the unborn child safe from a bad omen.

In modern-day California, the Native American Hupa and Luiseno tribes saw the Moon as sick or wounded. So the people would sing and chant healing songs toward the darkened Moon until it escaped the shadows.

In the African countries of Togo and Benin, they believed the eclipse was caused by an argument between the Sun and the Moon. It was the responsibility of the people to help them resolve their argument by resolving their own arguments. So during an eclipse, the people would put old feuds to rest, a practice that continues to this day.

Blood Moon eclipses are equated with the wrath of God in Christianity. When the date for Easter was being debated, it was set for the first Sunday after the first Full Moon of spring, ensuring there would never be an eclipse on Easter. In fact, the term “Blood Moon” was made popular in 2013 when Christian minister John Hagee released a book called “Four Blood Moons”. He brought attention to four total lunar eclipses, referred to as a “tetrad”, that were occurring between 2014-2015, noting that they all fell on Jewish holidays. He claimed this happened only three other times, each marked by terrible events. However, the fact is that there have been 62 Blood Moon tetrads since the 1st century of the Common Era. Christianity sees a blood-colored Moon as a sign of the beginning of the End Times. In the Old Testament, Joel 2:31 says that “the Sun will turn into darkness, and the Moon into blood, before the great and terrible day of the Lord comes.” In the New Testament, Peter repeats this on the day of Pentecost in Acts 2:20. Then Revelation 6:12 says, “And I beheld when he had opened the sixth seal, and, lo, there was a great earthquake; and the Sun became black as sackcloth of hair, and the Moon became as blood.” I heard these Scriptures as a child and they terrified me. It wasn’t until well into my adulthood that I learned these referred to eclipses and realized that these were residual superstitions from this ancient Mesopotamian religion.

WHERE TO GET VIEWING INFORMATION

You can find information about upcoming lunar eclipses and where to see them at TimeAndDate.com.