Casa Grande: A Mysterious Astronomical Structure in the Desert 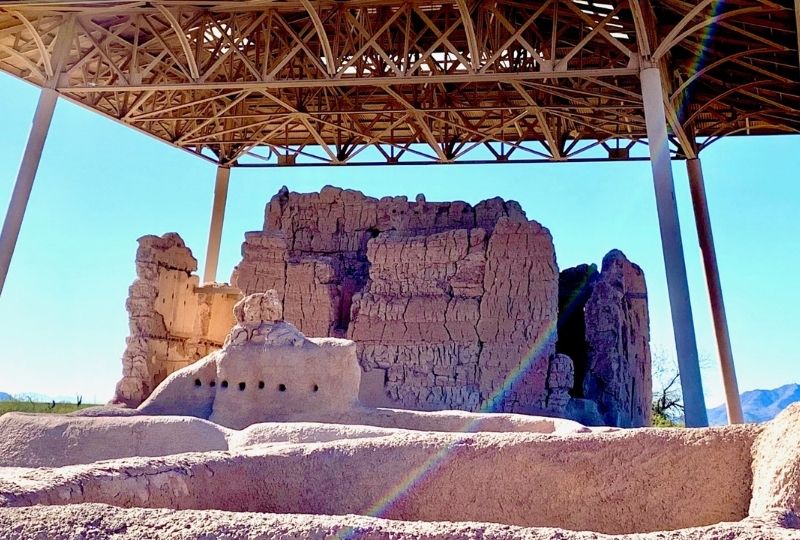 Although I have visited numerous historical places around the world, I felt something different when I visited Casa Grande Ruins in Coolidge, Arizona. I have lived in the Sonoran Desert for over two decades now, and I know the extreme heat of summer, the wildness of a summer monsoon storm with its flash floods, and the drought when the rain eludes us. So when I stood in front of this four-story earthen structure and thought about what it took to stack that mud in the dry desert, I could actually imagine it.

Casa Grande, or Great House, was built about 700 years ago by one of the ancestral Sonoran Desert clans that lived near the Gila River. It stands as one of the largest prehistoric structures in North America, yet its purpose remains a mystery.

While its purpose may be unknown, archaeologists have discovered many fascinating things about this mud structure. For one, it is a great example of Hohokam archaeoastronomy.

The walls are perfectly aligned with the cardinal points of the compass. In the East-facing wall, four holes are located near the top. Research indicates that they appear to provide astronomical observations of the equinoxes and solstices. The morning sun on those days would shine through those holes to illuminate an area against the back wall.

The sun appears to “stand still” twice a year on the Summer and Winter Solstices. The moon appears to stand still only once every 18.6 years. All of these occurrences are marked with these holes in the wall.

On the West-facing wall, there is a larger hole that is aligned with the setting of the Summer Solstice sun. The structure may have alignments with Orion, too, as it rose in the East.

Archaeologists also know that Casa Grande was some kind of ceremonial site, although the origins of the ceremony are unknown.

The ancestral Sonoran Desert people lived in the area surrounding the Great House. They built complex water irrigation canals from the Gila River to water their crops. Their trade connections were vast and their culture existed in the area for over a thousand years.

The name “Hohokam” is not the name of a tribe or a people. The ancestors of the O’Odham, Hopi, and Zuni people say that it is not a word in any of their languages or a name of a separate people. In a consensus of these ancestral tribes, they refer to the builders of Casa Grande as the ancestral Sonoran Desert people.

Today, the word “Hohokam” is used when discussing the archaeology and discoveries of the area, but ancestral Sonoran Desert people is the name for the people who inhabited these places.

LIFE IN THE DESERT

The Sonoran Desert people may have descended from an earlier hunting and gathering culture that dates back to 5,500 BCE. It wasn’t as dry or hot that long ago. But as the climate changed and domesticated corn from the area of modern-day Mexico began to influence the culture, the people transitioned from hunting and gathering to a farming lifestyle. They learned how to use water run-off from the mountains to survive in the dry desert environment.

The crops grown by the ancestral Sonoran Desert People included corn, beans, squash, cotton, and tobacco. They made use of the many native plants and animals of the desert. These included cactus fruits and pads, agave, mesquite pods and beans, and the medicinal creosote bush. They also hunted desert game such as birds, squirrels, rabbits, and lizards, and they found fish and clams in the rivers and canals. They went to the nearby mountains to hunt mule deer and bighorn sheep.

Their trade networks allowed them to import turquoise, pottery, pinyon nuts, obsidian, and even seashells from the Gulf of California and the Pacific Coast. They brought in copper bells, iron pyrite mirrors, and parrots from modern-day Mexico. In exchange, they traded their finely crafted shell jewelry and pottery. Casa Grande was an important crossroads in the trade system of the time.

The area suffered widespread depopulation and significant change in the late 1300s and early 1400s. Archaeologists suspect the causes may be related to drought, floods, disease, invasion, earthquakes, internal strife, or salinization of farmland.

Casa Grande was given its name by Father Eusebio Francisco Kino, a Spanish missionary who visited the ruins in 1694. When a railroad arrived twenty miles to the west in the 1880s, the structure sustained damage from souvenir hunting, graffiti, and vandalism, leading to the move to preserve it.

Following a few years of repair work to the structure and petitions to the U.S. government to provide protection, President Benjamin Harrison set aside one square mile of Arizona Territory surrounding the Casa Grande Ruins as the first prehistoric and cultural reserve established in the United States. President Woodrow Wilson proclaimed the ruins to be a National Monument in August 1918 and transferred the management of the site to the National Park Service.