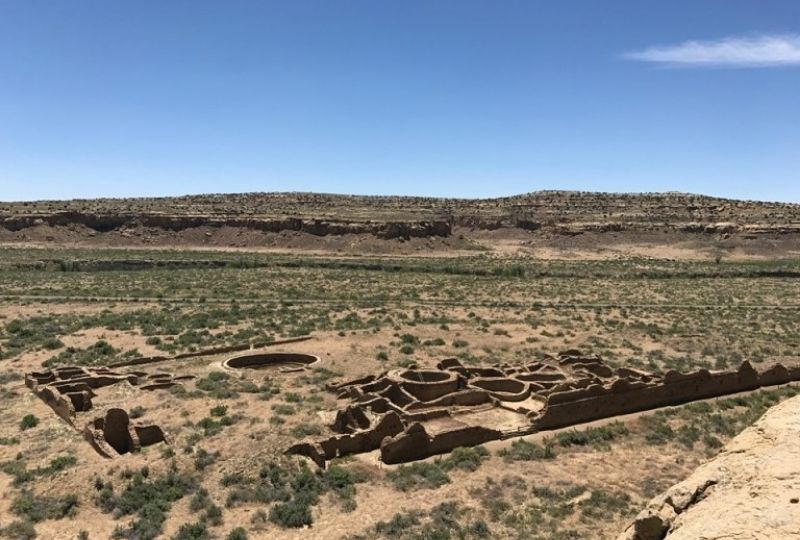 It’s hard to beat New Mexico for dark skies, ancient ruins, and outdoor adventure. It beckons night sky tourists with its spectacular treasures. Chaco Canyon National Historical Park is one of those extraordinary gems and an excellent example of ArchaeoAstronomy.

Located 72 miles south of Farmington, Chaco Canyon contains the largest collection of ruins in Northwestern New Mexico. The site remains one of the most important preserved cultural and historical sites of the pre-Columbian era in the United State.

Built between 900 and 1150 CE, Chaco was a major cultural center for the ancient Puebloans. Twelve generations devoted themselves to building over 150 massive stone structures in nearly impossible desert conditions. They cut and hauled thousands of tons of sandstone from the mesa tops nearby and transported 220,000 timbers from 50-70 miles away, all on foot.

Early archaeologists suggested that trade motivated the Chacoans to build. The collection and distribution of goods from a 35,000 square-mile area could explain the massive roads and structures. But later discoveries cast doubts on this theory.

The Chacoans did not have a written language, yet archaeoastronomer Anna Sofaer, who studied the ruins for 20 years beginning in 1977, uncovered some of the story they left behind.

Sofaer’s discoveries revealed an intricate astronomical system in the design of this vast Pueblo site.

Standing alone in the canyon is the soaring Fajada Butte. Near the top, the Chacoans cut three large slabs of sandstone from the cliff and stood them on end. Behind them, they carved a large spiral petroglyph onto the cliff wall and a smaller spiral to the left of it.

When Sofaer visited the site near Noon on the Summer Solstice, she discovered a ray of light that came through the opening between the slabs and created a dagger of light that perfectly bisected the large spiral. As she studied it throughout the year, she found that a second sun dagger bisects the smaller spiral on the Spring and Autumn Equinoxes. Two sun daggers perfectly bracket the large spiral on the Winter Solstice. The Chacoans devised this calendar through many decades of careful observation.

Next, Sofaer’s team (called the Solstice Project) discovered astronomical alignments in many of the ruins.

Pueblo Bonito, the largest ruin, has one straight exterior wall and it runs perfectly East and West. Only on the Spring and Autumn Equinoxes does the sun rise and set at each end of this wall. An interior midwall runs perfectly North and South. The ruins of Hungo Pavi, Tsin Kletsin, and Pueblo Alto also display these astronomical alignments.

Why did the Chacoans go to such lengths to mirror the Sun in perfectly symmetrical patterns?

“As these people would view the heavens, there was an order of things up there,” said Phil Tuwaletstiwa, a geodesist of the Hopi tribe. “What you had here, of course, contrasted to that. If there were a way to transfer the orderly nature of the cosmos down onto what seems to be chaos that exists here, then you begin to integrate at this place both heaven and earth. And this would be viewed typically in Pueblo culture as the center place.”

The Moon is vivid and bright in Chaco. Today, few are aware of the moon’s long, complex cycle. We understand the monthly phase changes. We recognize the shifting of its rising and setting throughout the seasons. But the longer cycle eludes most of us because it is so gradual.

The Moon rises and sets farther and farther North as Winter approaches. But if you track the midwinter Full Moon (near Winter Solstice) over 9.25 years, it would rise and set further North each year, then reverse to rise farther South each year for the next 9.25 years, completing a nearly 18.5-year cycle. These far points in this cycle are called the Maximum and Minimum Extremes. It would take generations to track and mark this cycle and would offer little practical value to the Chacoans.

Yet the Chacoans indeed tracked and marked this cycle on that same large spiral on Fajada Butte.

Seven buildings in Chaco Canyon have alignments with the Maximum and Minimum risings and settings of the Moon. No other culture in the world is known to build structures in alignment with this long cycle.

Connie Garcia, an Acoma Pueblo anthropologist said, “I feel like I’m connected to a more primal time. It’s hard to believe that people who didn’t have sophisticated equipment like we do these days could actually plot something like that.”

Research shows that people did not live at Pueblo Bonito and the surrounding ruins. So why did they come here?

Archaeologists discovered enormous mounds of broken pottery in more than one location in Chaco Canyon. In the Pueblo traditions, the deliberate breaking of a pot is an offering.

Edmund Ladd, a Zuni archaeologist said, “In the process of destroying an object, you send it into the afterworld because you make it unusable for the living. They were gifts to the dead and gifts for purification.”

Chaco Canyon appears to demonstrate an astronomical mirror of the cosmos where the ancient Pueblo people gathered for ceremonial worship.

To this day, tribes that descended from the Pueblo will time their ceremonies in their circular kivas to the solar cycle. Chaco Canyon held 15 great kivas, each holding 400 or more people, and 100 smaller kivas, each holding 50-100 people. Many thousands could worship here at one time.

Without writing, this civilization wrote the story of their cosmology in the alignments of their buildings with the Sun and Moon. This design directed the activities of these ancient people for over 250 years until the canyon was abandoned.

Visitors today can view that same pristine night sky and find a connection to the ancient culture that built it. In 1993, the park set up protections to preserve the night sky as a critical natural resource. On August 19, 2013, Chaco Canyon National Historical Park was officially designated a Dark Sky Park by the International Dark Sky Association. The park’s natural nighttime darkness, commitment to reducing light pollution, and ongoing public outreach led to its certification.

Chaco takes advantage of this asset through evening astronomy programs at their public observatory. These programs highlight the practices of the ancient Chacoans a thousand years ago.

The Albuquerque Astronomical Society hosts two major Star Parties at the park each May and October. The annual Astronomy Festival is held during the Autumn Equinox in September.

The National Park Service website says, “Visitors are drawn to the park to learn about the monumental Chacoan sites, to view the pecked and painted images on canyon walls, to observe scattered pieces of pottery, to ponder the greatness of the Chacoan world. It is natural to wish for a connection with the people who flourished in this stark and challenging place. The night sky, so clear and brilliant at Chaco Canyon, is a special connection that we all share, as we look to the skies to better understand our place on earth.”

Joe and Nancy Bill are the co-founders of the Fountain Hills Dark Sky Association. They visited the park in 2013. It was a coincidence that they arrived on the Summer Solstice, not knowing about the park’s astronomical significance in advance.

“We went to the park to explore the ruins and do some hiking. We came over a hill and saw a group of Hopi Indians dancing,” said Nancy. When they joined the group gathered there, they learned about the Summer Solstice traditions and how tribes from all around participate in the celebrations.

Joe and Nancy travel as often as they can to explore ruins throughout the Southwest. When I met with them, Joe was wearing a t-shirt from Mesa Verde that said, “My life is in ruins.”

“There are five or six ancient roads leading to Chaco Canyon like spokes going out from the center,” said Joe. “They go in straight lines for long distances. And if they ran into a cliff while building, they didn’t make switchbacks. They just pushed stuff over the edge of the cliff until there was enough to keep going and keep their line straight.”

“Or else they created handholds and footholds and just kept going,” added Nancy.

The North Road holds particular importance to the Puebloans to this day. Their origin story tells how their people came into existence in the North. This road is around 30 feet wide and its arrow-straight alignment surprises most people today.

The architecture at Chaco impressed the Bills. “It was amazing how they built such long, straight walls,” said Nancy. “They had to cut up those rocks and stack them just right to get those perfect alignments.”

“It amazes me to think they were able to figure out that archaeoastronomy back then,” Joe added.

Dark Sky efforts were not on the Bill’s radar at the time, but Joe noticed the pristine night sky. “It is a really dark sky there because Chaco Canyon is in the middle of nowhere. Truly! It’s over 6,000 feet in elevation, no lights, and now it is an International Dark Sky Park.”

“I appreciated learning about the enormous effort required to excavate these ruins,” said Nancy. “I don’t know how they did it! Some of the buildings were completely buried in dirt and soil.”

Jamie Britt is an outdoor adventurer and a seeker of spiritual experiences through connecting with nature. She lives in Aztec, New Mexico, just 70 miles north of Chaco Canyon. She is a frequent visitor to the park and often takes friends and clients along for the trip.

“When I visit Chaco, I feel connected to something greater than myself,” she said. “I don’t understand it, but there is a sacred nexus to the Universe there.

“The events that Chaco offers provide an opportunity to understand how closely the ancient people worked with the heavens. They knew and understood things that we as a society are working to forget. Humans are made of stardust and this is a fact. The bond that is apparent between Chaco and the Universe will seduce you, and leave you wanting to re-establish your place in nature.

“The night sky here is pure, and you feel it,” she continues. “The skies have a lot to teach us, and this is an exceptional classroom. Hiking with the Sun and sitting with the Stars will reset your humanity. The remote location and absence of light are a part of this vital experience. Humans need places for renewal without pollution in its many forms, including light. In the absence of artificial light, you can truly see and experience the heavens. Chaco has so many things to teach us, and protecting her is vital to humanity. If we lose the sacred locations that allow us to look up and see ourselves in pure form, we doom our future.

“Pueblo Alto trail is my favorite. I love walking it and trying to see things from the ancients’ perspective. Jackson Stairway is my favorite place in the park. I think of the love that built those stairs, and how many people walked them. Definitely see Pueblo Alto when you visit.”

Chaco Canyon would make a superb location for your astrotourism travel list. Joe and Nancy Bill and Jamie Britt gave tips for those wishing to visit:

For more information about the park, visit https://www.nps.gov/chcu/index.htm.

*Quotes from Anna Sofaer, Phil Tuwaletstiwa, Edmund Ladd, and Connie Garcia can be found in The Mystery of Chaco Canyon documentary.