Earth Day for the Night Sky 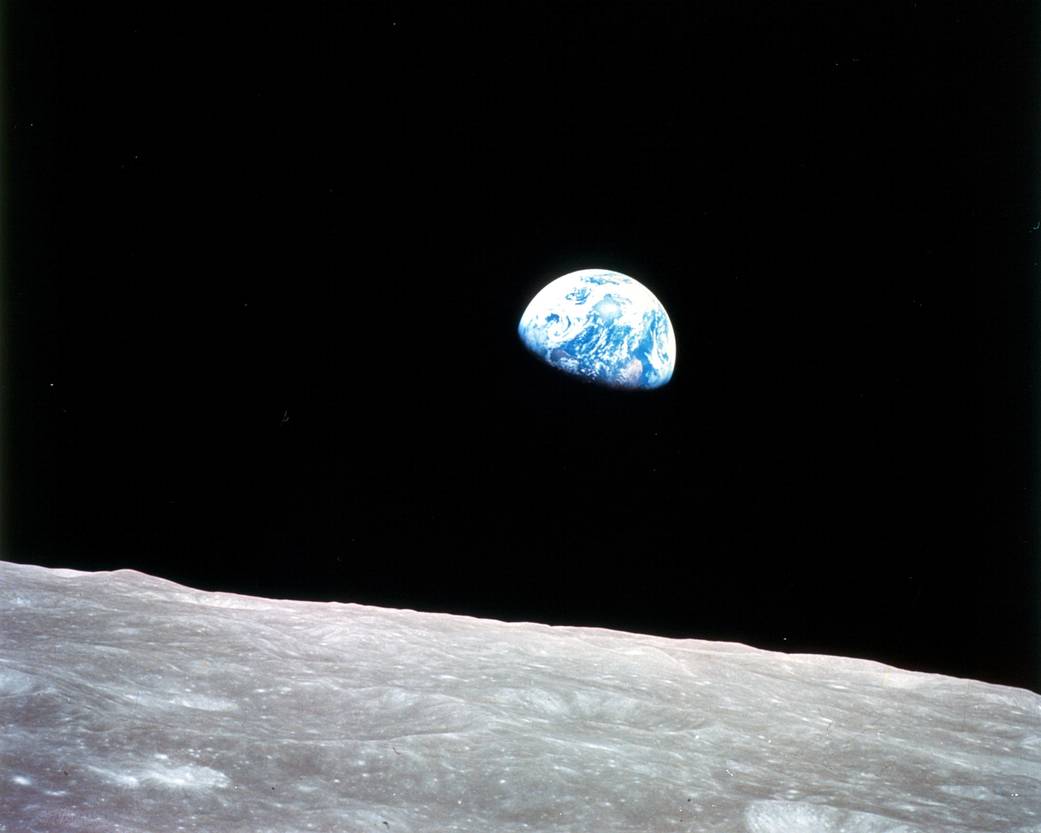 On December 24, 1968, William Anders peered through his camera aboard the Apollo 8 lunar orbiter and took one of the most famous images of all time. As the orbiter made its way across the surface of the moon, the astronauts watched Earth rise above the horizon. Anders snapped a photo that would help spark an environmental movement back on Earth.

Just two months later, the largest oil spill at that time happened just off the coast of Santa Barbara, California. It dominated the American news cycle and the outraged public demanded environmental action.

In June of that same year, the Cuyahoga River in Ohio caught on fire. An oil slick caused by industrial waste was ignited by sparks from a passing train. The flames reached five stories into the air and burned for about thirty minutes. It wasn’t the first time the Cuyahoga River burned, but by June 1969, Americans were becoming environmentally conscious. EARTH DAY IS BORN

Following the rapidly occurring events of the image of Earthrise, as it became known, the oil spill, and the river fire, Earth Day was born on April 22, 1970. On that first Earth Day, more than 20 million people poured into the streets across the country, making that event in 1970 the largest single-day protest in human history.

Earth Day has since grown into an annual global event with over one billion people participating. It was on Earth Day in 2016 that the United States, China, and 120 other countries signed the Paris Agreement, a historic climate protection agreement. In 2020, despite an ongoing pandemic, over 100 million people around the world celebrated Earth Day’s 50th anniversary virtually.

Today, Earth Day is widely recognized as the largest secular observance in the world. Billions of people from every place on the planet make it a day of action to change human behavior towards the planet. They work to create global, national, and local policy changes to make our planet a better place to live tomorrow.

However, if you browse through the issues represented on the EarthDay.org website, you will find that light pollution barely makes a mark among the many other issues raised. But that is changing as the International Dark Sky Association and other groups work tirelessly to bring attention to the environmental harms caused by light pollution.

Nocturnal animals sleep during the day and are active at night. When light pollution is present, their nighttime environment is turned into day. This alters their behaviors. Research scientist Christopher Kyba says that for these nighttime creatures, “the introduction of artificial light probably represents the most drastic change human beings have made to their environment.”

He goes on to explain that predators rely on light to hunt while their prey needs darkness for cover. “Near cities, cloudy skies are now hundreds, or even thousands of times brighter than they were 200 years ago. We are only beginning to learn what a drastic effect this has had on nocturnal ecology.”

Frogs and toads croak at night as part of their breeding ritual, and fireflies use their lights to find mates. But glare from artificial lights interrupts those behaviors. This interferes with reproduction and we are seeing reduced populations of those species.

Although sea turtles spend their lives in the ocean, they lay their eggs in the sand on beaches. Those eggs hatch and the babies leave their sandy birthplaces at night. Their instincts tell them to head toward the bright, reflected light over the ocean caused by the moon and the stars. But the glare of artificial lights along the beaches confuses the turtles, causing many of them to head in the wrong direction. This has caused the death of millions of baby sea turtles every year in Florida alone.

When birds migrate, they do most of their flying at night. They use the light of the stars and the moon to navigate. But artificial light confuses them, causing them to wander off course. Many of them end up smashing into the windows of brightly lit buildings and other landscapes of cities. Every year, millions of birds die this way.

In addition to navigational disruption, birds often miss their seasonal cues to migrate. Artificial lights can cause them to migrate too early or too late. This can result in missing ideal climate conditions for nesting, foraging, and other behaviors.

Insects have always instinctually been drawn to light, but artificial lights create a fatal attraction. When large numbers of insects gather around an artificial light source, they are easy prey. Predators exploit this which results in a change in food webs and declining insect populations.

In episode 4 of our podcast, Ranger Amy Burnett discusses easy things homeowners can do to protect local wildlife from the direct impacts of light pollution in their own yard.

Earth Day is a good time to reflect on our own exterior lighting practices to see if there are things we can to do protect wildlife and the environment at night. For more information on ways you can make your home Dark Sky Friendly, visit https://idsw.darksky.org/activities/dark-sky-friendly-home/

In Life’s 100 Photographs that Changed the World, wilderness photographer Galen Rowell called the image Earthrise “the most influential environmental photograph ever taken.” Some people consider this single image to be the beginning of the environmental movement.

On the 50th anniversary of the day the photo was captured, William Anders said, “We set out to explore the moon and instead discovered the Earth.”

Likewise, spending time under a starry sky, looking at those distant celestial objects, we often discover our own place in this world.

This year, celebrate Earth Day into the night by adding some stargazing to your itinerary. Experience the magic and beauty of the night sky and gain a new perspective of planet Earth.