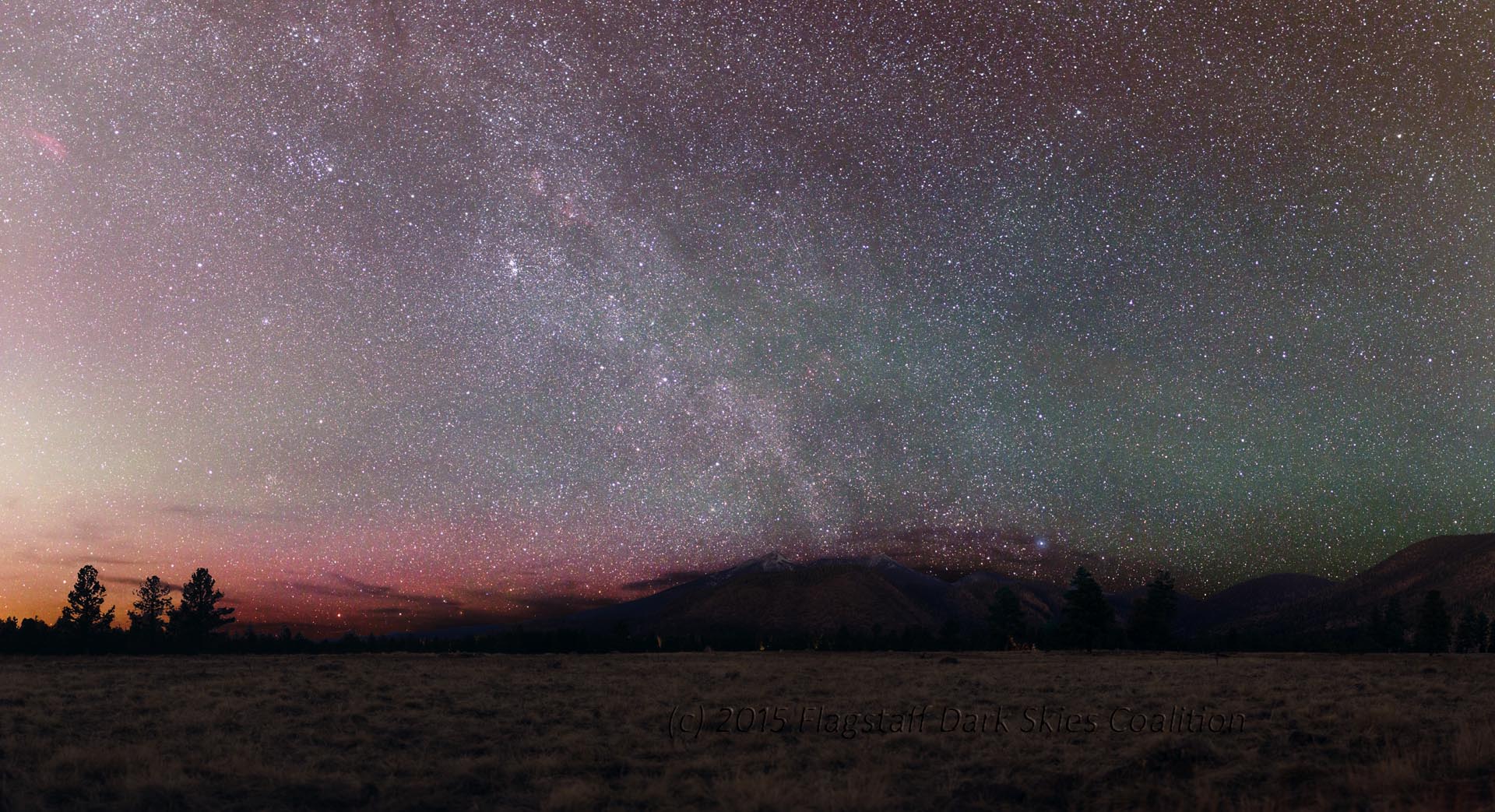 Flagstaff, Arizona deserves the first place on my list of “Best in Astrotourism”. I love making a quick weekend getaway to the cool pines of Flagstaff to escape the scorching heat of the Phoenix area. I’m drawn to the gorgeous hiking trails, the super cool old downtown where I hit my favorite ramen shop, and the town’s rich history.

But Flagstaff gives me two outstanding reasons to keep it at the top of my astrotourism list: it is the World’s First Dark Sky Community and the home of Lowell Observatory where Pluto was discovered in 1930.

The high altitude and dry climate of Flagstaff lured Perceval Lowell, a wealthy businessman and astronomer from Boston, in the 1890s, only a decade after the town sprang to life. In 1894, he built Lowell Observatory. It is one of the oldest observatories in the United States and was designated a National Historic Landmark in 1965. TIME Magazine named it one of “The World’s 100 Most Important Places” in 2011.

Lowell suggested the existence of a planet beyond Neptune and searched for it from 1905 until his sudden death in 1916. In 1929, the 22-year-old researcher Clyde Tombaugh was hired to continue the search for the planet that eluded Lowell.

Tombaugh spent up to seven hours a day comparing photographic plates of sections of the night sky using a Blink microscope. He looked for any object that moved from one slide to the next, indicating planetary motion.

“Some of the plates in the Scorpius [and] Sagittarius regions were running right around over a million stars apiece,” Tombaugh once told an interviewer. “You can only do a few square inches a day as a hard day’s work, and it takes about a month to do about one pair thoroughly. I covered three-fourths of the entire sky. And 19 million stars passed in review under the Blink microscope.”

On February 18, 1930, Tombaugh found what he was looking for and the world was informed on March 13, Lowell’s birthday.

LOWELL OBSERVATORY IN THE 21st CENTURY

Today Lowell Observatory welcomes over 100,000 visitors a year. While parts of the campus are a living museum of the Pluto heyday, it remains relevant today and continues at the forefront of cutting edge astronomy research.

In addition to its historical telescopes still in use, Lowell also operates four research telescopes in locations near Flagstaff, including the Discovery Channel Telescope. In October, Lowell unveiled the Giovale Open Deck Observatory with six new state-of-the-art telescopes for public viewing.

Research facilities like these are extremely sensitive to even tiny amounts of light pollution. Preservation of the night sky is critical to research and star-gazing.

Flagstaff has a long history of leading the way in dark sky preservation.

It was the first community in the world to adopt regulations to limit the impact of lighting on the night skies in 1958.

It was the first community in the world to adopt regulations to limit the total amount of light that can be installed in development projects in 1989.

It is one of the few communities in the world with a strict “amber light” requirement.

The city worked with the Flagstaff Dark Skies Coalition to create a dark sky places program that was adopted by the International Dark Sky Association in 2001. This award-winning program has since awarded Dark Sky designation to over 200 locations around the world, starting with Flagstaff, the “World’s First Dark Sky Community”.

Christian Luginbuhl of the Flagstaff Dark Skies Coalition credits this long tradition of limiting light pollution with the city’s unique place in the world of dark sky preservation. “These standards have led to a Flagstaff skyglow that is more than 90% fainter than other towns of similar size without regulations.”

Education has been vital in building dark sky awareness in the community. “Our mission is to celebrate, promote, and protect the glorious dark skies of Flagstaff and Northern Arizona,” Luginbuhl says. “We understand that the more people become aware of the community effort over the last 60 years in Flagstaff, the more they are willing to support protection through community planning efforts and updated standards.”

Tiffany Antol, Planning Director of the City of Flagstaff, agrees that this long history of limiting light pollution has made it easier to accomplish their goals in being a dark sky community. “The groundbreaking zoning codes adopted by both the city and the county were prepared in conjunction with experts from the Naval and Lowell Observatories. Because of this long-standing work and dedication to preserve our dark skies, it reduced the hurdles to becoming a dark sky community.”

Antol explains that of the few complaints city officials receive about Flagstaff being too dark, most are usually from people who are new to the community.

Preserving the night sky is valuable for maintaining the community’s astronomy heritage and cutting edge research. It also creates an environment for a wide range of night sky-related activities and events.

“Our principal efforts to celebrate the night sky is through community events like the annual Flagstaff Star Party and our semi-annual Celebration of the Night series,” says Luginbuhl.

The annual Festival of Science is a 10-day event each fall with field trips, guided hikes, star parties, open houses, hands-on exhibits, presentations, and archaeological excavations. Lowell Observatory and some of the other astronomy-related groups and organizations offer talks and activities that promote astronomy education and dark sky awareness.

If you like beer, there is a Flagstaff chapter of Astronomy on Tap. The free program is organized by Lowell Observatory and includes an astronomy presentation while you enjoy your suds.

The Coconino Astronomical Societybrings together stargazing enthusiasts of all levels of expertise. Members can attend monthly meetings with guest lecturers, attend astrophotography workshops and special events coordinated with Lowell Observatory.

David and Annette Betts visited Lowell for the first time in the spring of 2019. David says, “Walking up to Lowell Observatory where history was made in the discovery of Pluto is a fond memory for me. Those who want to walk where this discovery was made should include this in their travel plans. It’s one thing to learn about it on their website, but the tour led by a knowledgeable tour guide is an enhanced experience. It was worth our trip.”

One of the bits of information learned during the tour stuck with Annette. “I was amazed when they talked about what it took to figure out how to rotate the dome on the Clark telescope. The story of the trial and error of figuring out how to make it work was fascinating. What impressed me the most was that it still works today.”

The Bettses explain an experience they had when they had to pull off the Interstate just a few miles south of Flagstaff when they left town that evening. In order to avoid texting and driving, they took an exit and immediately noticed just how dark the sky was.

“When I was gazing up at the stars,” said Annette, “I was amazed at how clear the sky was. There were so many stars in view that I felt like I was on another planet. It was almost overwhelming.”

David said, “That dark sky was almost like Vietnam when I was there in the ‘70s. There were no lights to interfere with seeing what seemed like a view of all the visible galaxies. Contrast this to places like The Philippines where smog and city lights turn the night sky into a murky gray so that it’s not possible to see the stars.”

Jennifer Brown took her daughter on a field trip to Lowell and participated in both day and night programs. “I visited Lowell Observatory without having any prior expectations. I didn’t have any real interest in stars or planets. I was there for my daughter. I was utterly fascinated by the history of the discovery of Pluto.”

“While I was there, I looked through a telescope for the first time in my life. During the daytime, I looked directly at the Sun through a special solar telescope and saw some sunspots. That night I looked through two different telescopes and got to see the craters on the Moon and saw Neptune. I was completely awestruck to see so much definition in the Moon’s craters!

“I now have an appreciation for astronomy and the science behind it. I thoroughly enjoyed my visit and highly recommend it.”

Noelle Derksen is a college student who visits Flagstaff frequently. “Flagstaff is a great star-gazing city. I recently took a trip there with a group of friends and we decided to do some star-gazing in the forest. We threw a bunch of pillows and blankets in the back of my friend’s pickup and we all piled in to stare at the night sky.

“We tried to find constellations and made up some of our own. There were so many stars compared to where I live and we could even see the Milky Way. Flagstaff is probably my favorite place to go star-gazing.”

The best starry skies are, of course, located in the darkest places on the planet:  in the middle of the ocean, the tops of remote mountains, and remote areas like the Colorado Plateau where Flagstaff sits.

“Enjoying really dark skies means going to remote locations,” says Luginbuhl. “But very good dark skies with all the amenities commensurate with a town of 70,000 inhabitants are available and very close to Flagstaff.

“We like to say that Flagstaff has ‘the world’s most accessible dark skies’. We are on the edge of some of the best dark skies remaining in the continental U.S., and indeed the world. These remote skies can often be darker than those in Flagstaff, yet are close enough that the amenities offered by our town can help facilitate your visit to these remote locations.”

The nearby Grand Canyon National Park is one of the most recognizable places in the world. The park marked its 100th anniversary by earning its Dark Sky Park designation in June 2019. They entice visitors with the slogan “half the park is after dark”.

The Petrified Forest National Park got its name for the large petrified trees that lived about 225 million years ago. Fossils of giant reptiles called phytosaurs, large amphibians, and early dinosaurs are also found here. The earliest inhabitants left behind more than 600 archaeological sites, including petroglyphs. It was designated a Dark Sky Park in 2018 and offers a variety of nighttime programs.

Meteor Crater formed when a meteor collision shook the American Southwest about 50,000 years ago. It released the energy of more than 20 million tons of TNT. The dry climate makes it the best-preserved meteor impact site in the world. The Visitor Center features an 80-seat widescreen theater, indoor crater viewing area, an interactive discovery center, a 4D experience room, a bistro, and a one-hour guided rim tour.

Flagstaff is a worthwhile vacation destination during the day, too.  If you love hiking, my favorite nearby hikes include the Inner Basin Trail, Kachina Trail, and the Lava River Caves.

Whether you love museums or not, it’s hard to not love the tour of the Riordan Mansion and the Museum of Northern Arizona.

If you’re visiting during the snowy season, Arizona Snowbowl is a superb place to ski or snowboard. Or rent snowshoes at the Arizona Nordic Village.

How can anyone visit Flagstaff for the dark skies without grabbing a beer or kombucha on tap at the Dark Sky Brewing Company? My favorite eateries in the old downtown area are Sosobafor a bowl of sophisticated ramen, Swadeefor delicious Thai food in a beautiful restaurant, and Diablo Burger for locally-sourced burgers and fries.

For more ideas on things to do, visit https://www.flagstaffarizona.org

Today, Flagstaff holds a special place in the world of astrotourism. Its dark skies, astronomy history, and outdoor recreation put it at the top of my Night Sky Tourist list for an astrotourism adventure.