Hohokam Archaeoastronomy in the Phoenix Area 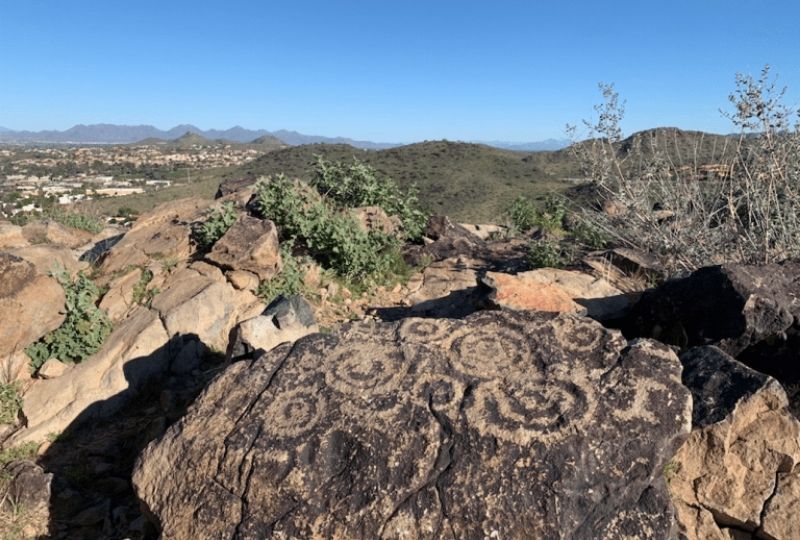 Phoenix, Arizona is certainly not known for having dark skies. As one of the fastest-growing major metropolitan areas in the country, it sprawls across nearly 15,000 square miles. This massive expanse of urban and suburban populations puts an enormous amount of light pollution into the skies above.

Even so, it still offers astrotourists who are interested in archaeoastronomy a reason to visit.

Known today as the Valley of the Sun, Phoenix and its surrounding area were home to the ancient Hohokam people for nearly a thousand years. They are best known for creating about 500 miles of irrigation canals for 100,000 acres of cropland.

Hohokam settlements were located along major trade routes, allowing them to connect with other cultures all the way to the Great Plains, the Pacific Coast, and into Mesoamerica (much of modern Central America). Yet the harsh desert living conditions forced them to be self-sufficient and to make good use of local resources.

Archaeologists believe that severe droughts and floods between 1300-1450 CE may have caused them to abandon the area.

Modern-day Phoenix’s founding is credited to Jack Swilling, a Confederate veteran of the Civil War. While traveling through the Valley in search of gold in 1867, he recognized the potential for farming in the area. He set up a community just 4 miles east of modern downtown Phoenix. Later that year, he formed the Swilling Irrigation and Canal Company with inspiration from the ancient Hohokam canals.

Lord Darrell Duppa, one of Swilling’s travel companions, suggested naming the new settlement “Phoenix” because it described a city born from the ruins of a past civilization.

Ancient people everywhere, including the Hohokam, were deeply attuned to the cycles of nature and the movements of the day and night sky. It was necessary for their survival.

In the book Landscape of the Spirits, author Todd W. Bostwick writes “We believe the Hohokam were dedicated skywatchers and thoroughly familiar with the annual movements of certain celestial bodies.” Bostwick goes on to explain that paleobotanist Vorsila Bohrer believes the “ancient and historical agricultural people of the American Southwest defined their universe by the path of the sun.”

Archaeologists believe that Hohokam ceremonial and ritual systems were likely influenced by Mesoamerican religions which centered around the observations of the day and night skies.

“According to O’odham [descendants of the Hohokam] oral traditions, the sky is seen as a vault, with Earth Doctor spitting water into the sky to create stars and throwing a block of ice to make the sun. He then commanded Gray Spider to spin a web connecting the edges of the sky with the earth.”

The O’odham carefully tracked the movements of the sun throughout the year, believing it was omnipotent. They also used the dawn location of Pleiades as a seasonal marker for establishing their calendar. Archaeological finds across the Valley indicate that the Hohokam used three types of calendar: horizon calendars, light and shadow markers, and lunar phase counts. These are similar to the calendars used by the nearby Puebloan cultures.

The Hohokam left behind numerous petroglyphs in locations all around the Valley of the Sun and nearby areas. Many of these petroglyphs can be reached via hiking trails in the Superstition Mountains to the east, scattered widely across South Mountain in South Phoenix, throughout North Mountain and Lookout Mountain in North Phoenix, in Carefree in the far North Valley, and more.

Some of the petroglyphs are astronomical in nature. Todd Bostwick’s studies of rock art in the South Mountain Preserve show that the Hohokam marked important locations where the sun rises and sets on the eastern and western horizons. These include the summer and winter solstices and the spring and fall equinoxes.

In cultures that worshiped the sun, such as the Hohokam, individuals or groups may have used this information to maintain a high status in their community. Hohokam sky watchers likely held positions of a high level of responsibility.

Although research of Hohokam astronomy in the South Mountains remains incomplete, there is evidence that some of the rock art there could have also marked the movements of other celestial bodies, such as the moon and Venus.

Hole-in-the-Rock is a natural rock formation in today’s Papago Park in Phoenix. It is a short 0.2-mile hike up a butte with a wind-eroded hole. The hole gives hikers a beautiful view of downtown Phoenix, but it also gave the ancient Hohokam a place to mark the setting of the Summer Solstice sun. Archaeologists discovered notch marks along the opening of the hole that align with the Summer Solstice sunset.

Casa Grande Ruins in modern-day Coolidge, Arizona is an ancient four-story Hohokam structure. It is one of the largest prehistoric structures in North America, but its purpose remains a mystery.

It was built about 700 years ago within a walled complex where one of the Hohokam clans lived near the Gila River. Its walls face the four cardinal points of the compass. Four holes located near the top of the structure’s east-facing wall appear to provide astronomical observations of the solstices and equinoxes. The morning sun on those days would shine through the holes to illuminate an area against the back wall. A larger hole on the west side of the structure was aligned to the setting of the sun on the Summer Solstice. The structure may have had alignments with Orion, too.

Casa Grande, the “big house”, was a ceremonial site, but fell into disuse less than a century after being built as the Hohokam moved away from the area for reasons that are unclear to archaeologists today.

The Hieroglyphic Trail is a 2.8-mile trail in the Superstition Mountains east of Phoenix. It’s a moderate hike that reaches beautiful seasonal pools and waterfalls and numerous petroglyphs life by the ancient Hohokam people. While I know of no astronomically aligned rock art at this location, being there provides another remarkable connection with the Hohokam who once lived in this area.

Author Todd Bostwick spent two years traversing much of South Mountain and writing about it in his book Landscape of the Spirits. This is how I learned about the Hohokam’s astronomical legacies left in their rock art. While I did not see astronomically aligned petroglyphs when I hike the Mormon Trail, such alignments have been found all across South Mountain. This is a great place to hike if you want to see Hohokam petroglyphs as they can be found on many of the trails.

Learn more about the area at the South Mountain Environmental Education Center. Explore the visitor’s center, participate in their various programs, or join their Astronomy Club.

The Shaw Butte Trail in North Mountain is a butt-kicker, but it offers hikers an unusual experience right in the heart of Phoenix.

At the top of the north end of Shaw Butte are some Hohokam ruins. Here you will see the remnants of what used to be stone rooms. The rocks had been dry-stacked without any mortar, so they easily collapsed over time. You can clearly see the outlines of the rooms.

There are also petroglyphs all around this area. Archaeologists explain that petroglyphs on one of the large boulders align with the Summer Solstice sunrise. The North Mountain Visitor Center has several great exhibits that explain this astronomical alignment and the Hohokam’s observance of the sky.

After the archaeological site, the trail continues on to a peak with radio and television towers. On the southern end of Shaw Butte are the remains of the old Cloud Nine restaurant that stood here in the early 1960s until it burned to the ground in 1964. It was Phoenix’s premier luxury restaurant that offered stunning views of the city below.

Although all that is left in this location is a mound of dirt, there are a few small areas that give you a glimpse of what once stood in this area. This large platform mound was once home to as many as 900 Hohokam near the Salt River in Mesa. There are a couple of locations on the mound where you can see walls that have been excavated from the ancient structure.

The small visitor center at Mesa Grande Cultural Park is a joint venture between the Arizona Museum of Natural History and the City of Mesa.

This site first opened in 1929 and has expanded into a two-thirds of a mile interpretive trail. You can see the remains of an ancient ballcourt and platform mound and walk into replicated Hohokam dwellings and agricultural gardens. The visitor’s center at Pueblo Grande Museum has an introductory video, galleries, and exhibits.

Arizona is filled with Dark Sky places and archaeoastronomy sites. Although Phoenix contributes the most light pollution to the state, it is worth including in your astrotourism travels through Arizona.

In addition to the Hohokam sites listed above, Phoenix has a variety of astronomy-related things to do.

The Dorrance Planetarium is one of the largest and most technologically advanced planetariums in the United States.

Maricopa County is home to one of the largest regional park systems in the country. The 12 parks in this system provide 120,000 acres of open space that includes hundreds of miles of trails, campgrounds, and nature centers. Most of them offer Full Moon hikes each month for a one-of-a-kind experience. The Maricopa County Parks circle the perimeter of the Phoenix metro area, all within 45 minutes from downtown Phoenix.

A nonprofit group in the community is currently raising funds to build a state-of-the-art International Dark Sky Discovery Center. With a theme of dark sky preservation, this 15,000 square-foot facility will include an observatory with a 27-inch telescope, a tilted dome planetarium, a theater for special presentations and events, and an immersive exhibit hall.

Although this is not a “place to visit”, it is a great resource for those who want to know more about Dark Sky efforts in the Phoenix area. Although Phoenix contributes a large amount of light pollution, the city has made efforts to improve its municipal lighting, starting with its streetlights. This organization is vital when it comes to the future of Phoenix’s night sky.