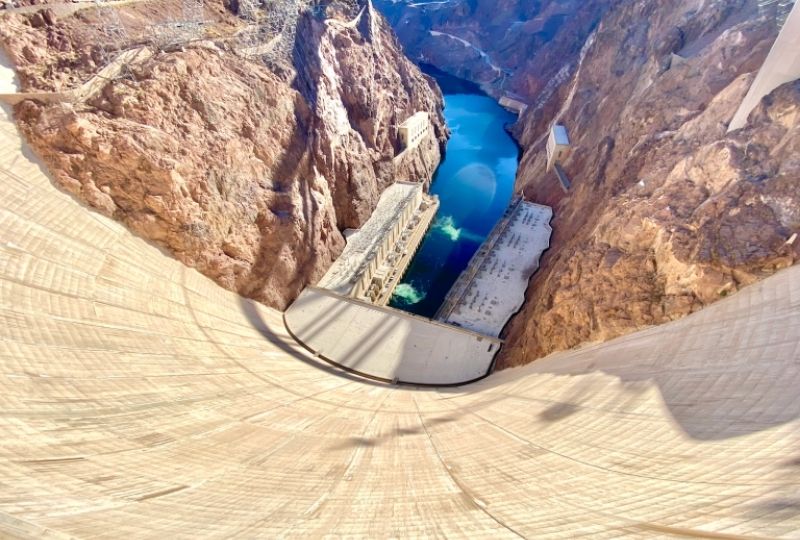 I recently visited Hoover Dam at the border of Nevada and Arizona and discovered an astronomical site!  It is a beautiful example of modern-day archaeoastronomy.

I visited Hoover Dam about fourteen years ago but never noticed this remarkable work of human imagination and astronomical knowledge. I suppose I was too busy freaking out after looking over the edge of the dam and thinking about what it would feel like to bounce off the concrete over and over until I plunged into the Colorado River below. Morbid? I’m just terrified of heights.

We parked on the Arizona side of the dam (east side) and took our time walking across. Other than the whipping wind, the first thing that caught our attention was how low Lake Mead has fallen. According to the National Park Service website, the waterline has dropped 143 feet since 2000. The area has been in significant drought for fifteen years now. Projections for the future show that there will not be enough natural water entering the lake to replenish what we take out.

This directly impacts me! I live in Fountain Hills, Arizona, and our source of tap water is Lake Mead. The water travels 190 miles through canals to reach my kitchen sink. In some places, there are massive pumps to lift the water over hills. It’s a fascinating story, but I’m not here to talk to you about water in the desert. However, if the topic of water in the desert interests you, you can get a short history HERE. If you really want to get in-depth with it, read the book Cadillac Desert: The American West and Its Disappearing Water by Marc Reisner.

There are two restrooms along the top of the dam for visitors to use. They are designed in a spectacular art deco look. In fact, the entire Hoover Dam project has an art deco design, thanks to architect Gordon Kaufman who came up with the plans for the finished look two years after the construction of the dam began.

Allen Tupper True, a Denver artist, brought in the design and decorations of the floors and walls where he incorporated Navajo and Pueblo motifs in recognition of the nearby tribes.

The border between Nevada and Arizona runs down the middle of the Colorado River, thus it passes through the middle of Hoover Dam. This is also where visitors can walk back and forth between Pacific Time and Mountain Time. However, most of Arizona (with the exception of the Navajo Nation) does not observe Daylight Saving Time. So for much of the year, Arizona and Nevada are in the same time zone. There is a clock on each end of the dam that shows visitors what time it is in each state.

It is on the western end of the dam (the Nevada side) that the astronomical site can be found. It is at the spot where President Franklin D. Roosevelt gave the dedication ceremony on September 30, 1935. The temperatures hit 102 degrees that day, but that did not stop the 10,000 visitors from participating in the momentous event. The dam cost $49 million to build in the middle of the Great Depression and cost 96 lives.

There is an interesting story about the controversy surrounding the name of the dam. Franklin D. Roosevelt referred to it as Boulder Dam in his dedication speech, but it had long been known as Hoover Dam in honor of the sitting president when the dam began construction. You can read the story HERE.

It is on this dedication site where I found the remarkable astronomical site. An astronomical clock, really. Or a celestial map.

Oskar J.W. Hansen wanted to create a clock that would allow visitors of an extremely distant future to be able to figure out, astronomically, when the dam was built. Hansen imagined a future where current languages no longer existed, but where math, astronomy, and physics would have remained and even advanced. So rather than embedding a written history to date the dam site, he chose to use a celestial map.

This map, embedded into the terrazzo of the dedication monument on the western end of the dam, emphasizes the time when the Egyptians built the pyramids, a feat that Hansen thought comparable to humans bringing water to the desert in the 1930s with Hoover Dam. In the days of pyramid building, Earth’s North Pole did not point at Polaris as it does today. Instead, it pointed to the star Thuban in the constellation Draco. And in the distant future, it will point to Vega in the constellation Lyra.

What causes the North Pole to shift? It’s something that astronomers call the “precession of the equinoxes”. Think about how our planet moves. It spins on its axis once every 24 hours. It’s also orbiting the Sun every 365.25 days. But it also has a wobble as it spins. Imagine spinning a toy top. As it goes round and round, it wobbles a bit. That’s what our planet is doing, but it takes 26,000 years to complete one “wobble”.

The discovery of this wobble dates all the way back to the 2nd century BCE with Hipparchus. His study was continued a few hundred years later in the 2nd century CE with Ptolemy. But if you dig into the history of this phenomena, you’ll find interesting claims that seem quite plausible that the Egyptians knew about this wobble long before Hipparchus talked about it and that it played into their culture in a significant way.

So when Oskar J.W. Hansen created a celestial map at Hoover Dam’s dedication site, the precession concept played a key role so that future civilizations would know when this massive human endeavor of controlling the water in the desert took place.

As you approach the dedication monument, your eyes will be drawn to the 142-foot flagpole flanked by two winged figures. Hansen called them the Winged Figures of the Republic. He said they express “the immutable calm of intellectual resolution and the enormous power of trained physical strength, equally enthroned in placid triumph of scientific accomplishment.”

The winged figures are 30 feet high and contain more than four tons of bronze. They each sit on a base of black diorite rock. Centered between the two figures is a flagpole with a top that points to the exact position of the sun at the time FDR gave his dedication speech at 11:00 AM on September 30, 1935.

Surrounding these is a terrazzo floor that is inlaid with the celestial map. Embedded in this floor are 209 metal discs representing all of the celestial bodies and stars that were visible with the naked eye on the night of the dedication ceremony. They are so precise that people will be able to accurately calculate the Earth’s precession for the next 14,000 years, which is the end of the astronomical Platonic Year (the 26,000-year wobble).

Near the figures and flagstone is an elevated compass that is circled by the signs of the zodiac.

While you are enjoying this remarkable monument and astronomical calendar, there is a narration playing from nearby speakers that talk about the monument and other nearby plaques and sculptures.

The Bureau of Reclamation has information on their website about visiting Hoover Dam with updated road conditions along with building and activity closures. You can find educational resources, read about the dam’s history, find out about special events, and read through their FAQ page. You can visit the website at https://www.usbr.gov/lc/hooverdam/ .