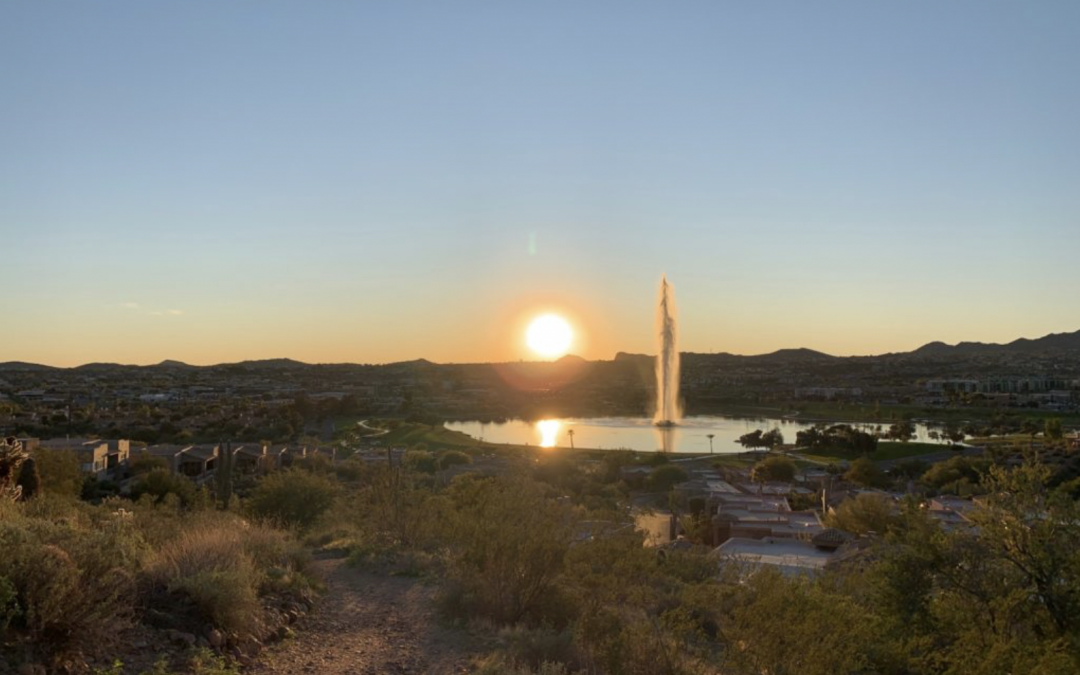 Phoenix might not be a place that pops into your head when you’re thinking about night sky experiences. But it should.

It’s true that you shouldn’t expect to see a star-filled night sky in Phoenix. The vast number of lights and careless lighting practices by the city, businesses, and homeowners will prevent you from seeing all but the brightest stars. But before you write off Phoenix, you should consider these other great night sky-related opportunities.

The suburb of Fountain Hills is on the far northeastern edge of the metro area. Its unique location gives it clearer night skies, leading to its January 2018 certification as the world’s 17th International Dark Sky Community. This is the town I call home, and I’m proud to have served on the board that worked so hard to earn this prestigious designation. I am serving as the board’s president at the time of this writing. Learn more at FHDarkSky.com.

Fountain Hills is naturally separated from the rest of the Phoenix area to the west by the small mountain range known as the McDowell Mountains. The Salt River-Pima Indian Community has miles of open land to the south. To the east is the Fort McDowell Yavapai Nation, where there are few lights to obscure the night sky and hundreds of miles of wilderness beyond it. To the north are McDowell Mountain Regional Park and a few small retirement communities with virtually no light pollution.

At the time of this writing, funds are being raised to build a 20,000-square-foot facility known as the International Dark Sky Discovery Center. This Fountain Hills facility will be home to the largest public telescope in the Phoenix metro area, a planetarium, a theater, and a hands-on, immersive exhibit hall. When completed, it will offer a remarkable astrotourism experience to local schools, tour groups, and people from around the world. I also serve on this board. Learn more at DarkSkyCenter.org.

The Dorrance Planetarium is one of the largest planetariums in the United States and is housed inside the Arizona Science Center. It offers various exciting programs such as Art 360, Lasers and Liquor, explorations across the solar system, and a glimpse into Maya archaeoastronomy. There is something special for everyone here. Learn more at AZScience.org.

South Mountain Park and Preserve is one of the largest municipal parks in the country, with over 16,000 acres. It was also an important area for the ancient Hohokam culture. Their influences span from Flagstaff to northern Sonora, Mexico. They thrived here from the first century CE until circa 1450 CE, leaving their marks on South Mountain in the form of petroglyphs.

Researchers like Todd Bostwick have combed this expansive mountain and discovered thousands of petroglyphs. Some are astronomical. Bostwick’s research shows the Hohokam marked important locations where the sun rises and sets on the eastern and western horizons. These include the summer and winter solstices and the spring and fall equinoxes.

In cultures that worshiped the sun, such as the Hohokam, individuals or groups may have used this information to maintain a high status in their community. Hohokam skywatchers likely held positions of leadership and power.

Although research of Hohokam astronomy at South Mountain remains incomplete, there is evidence that some of the rock art could also mark the movements of other celestial bodies, such as the moon and Venus.

In his book Landscape of the Spirits, Bostwick writes, “We believe the Hohokam were dedicated skywatchers and thoroughly familiar with the annual movements of certain celestial bodies.” He explains that paleobotanist Vorsila Bohrer believes the “ancient and historical agricultural people of the American Southwest defined their universe by the path of the sun.”

Archaeologists believe that Hohokam ceremonial and ritual systems followed influences from Mesoamerican religions, which centered around the observations of the day and night skies. “According to O’odham [descendants of the Hohokam] oral traditions, the sky is seen as a vault, with Earth Doctor spitting water into the sky to create stars and throwing a block of ice to make the sun. He then commanded Gray Spider to spin a web connecting the edges of the sky with the earth.”

The O’odham carefully tracked the sun’s movements throughout the year, believing it was omnipotent. They also used the dawn location of the Pleiades as a seasonal marker for establishing their calendar. Archaeological finds across the Phoenix Valley indicate the Hohokam used three types of calendars: horizon calendars, light and shadow markers, and lunar phase counts. These are similar to the calendars used by the nearby Puebloan cultures.

South Mountain is a great place to hike, mountain bike, and picnic while searching for some of this ancient rock art. Visit the South Mountain Environmental Education Center to learn about this area’s plants, animals, natural history, and conservation efforts. Learn more about the park at VisitPhoenix.com.

Shaw Butte has a little Hohokam secret in the Phoenix Mountains Preserve. You’ll discover a petroglyph with a Summer Solstice alignment if you can handle a rigorous hike.

You can continue your hike across North Mountain to check out the ruins of the mysterious Cloud Nine Restaurant that catered to the wealthy of Phoenix in the 1960s. I enjoyed learning about its history on the Valley 101 podcast.

Before you start your hike, stop in the North Mountain Visitor Center to learn about petroglyphs, geology, plants, animals, archaeology, and more. Learn more at NorthMountainVisitorCenter.org.

Pueblo Grande Museum showcases the ruins of the ancient Hohokam culture that made this area their home over a thousand years ago. They grew cotton and traded it with cultures across Arizona, New Mexico, California, and Mexico. They were also known for their beautiful pottery.

However, the thing they are most known for today is the extensive canal system that was partially revived in modern times. Pueblo Grande was the location of a major head-gate for controlling water for other communities along the canal system. All of this was done by hand without machines, engineering tools, or beasts of burden. Many of the canals in use by the Salt River Project (SRP) were originally constructed by the Hohokam.

The Hohokam are the ones who left petroglyphs related to their skywatching practices at South Mountain and Shaw Butte. Visiting Pueblo Grande Museum will give you a deeper look into the culture and lifestyle of these resourceful people. Learn more HERE.

You can also learn more about Hohokam archaeoastronomy HERE.

This theater is located in Arizona State University’s School of Earth & Space Exploration in Tempe. They offer virtual night sky events every other Wednesday. They also have 3D astronomy shows. Learn more HERE.

Mesa Community College offers free telescope viewing and planetarium shows on the first Friday of the month during their Spring and Fall semesters. Learn more HERE.