7 Constellations You Should Learn this Summer 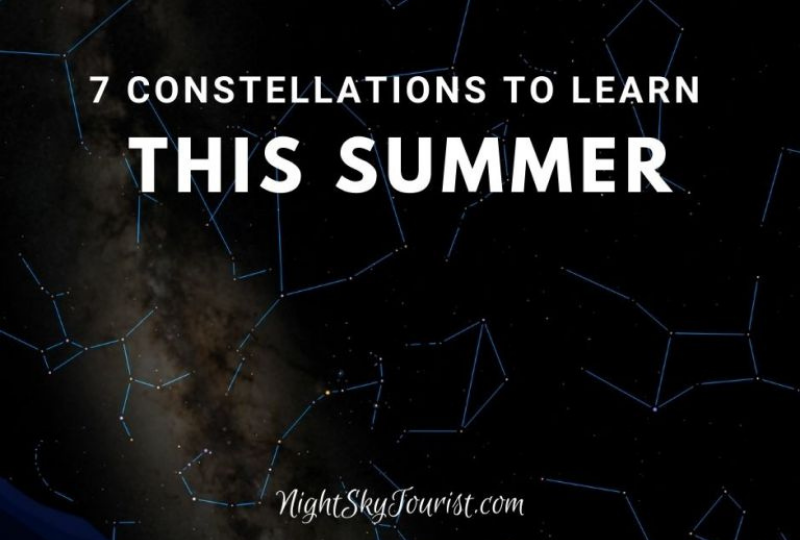 The best way to learn the constellations is to learn a few at a time each season. Once you identify these seven, you’ll easily spot them again next summer and then you can add a few more each year.

Make time to do some stargazing at least a couple of times a week. Try different times of the night and go to different locations. The more you can orient yourself to the stars in different settings, the more you will be able to find your way around.

Start this summer with the following seven constellations. Get to know them, their positions in relation to one another, and their brightest stars. Download a stargazing app on your smartphone or develop your skill of using a planisphere (or star wheel) to help you find these constellations.

Virgo, the virgin or maiden, is the second-largest constellation in the night sky, but it is not one of the easiest to find under light-polluted skies. It will be near the western horizon in the early part of the summer, but it will disappear from view by August. Virgo has just one bright star called Spica.

Libra, the balancing scales, is east of Virgo. Under light-polluted skies, you might only see the top portion of the scales which is defined by a triangular pattern of stars. If you are in a darker area, you may be able to see the dimmer stars that make up the bowls that hang from each side. Libra does not have any significantly bright stars.

Scorpius is east of Libra. When it has fully risen above the eastern horizon, it clearly has the shape of a gigantic scorpion. There are three bright stars that make up the region of his head and there is one exceptionally bright, reddish-colored star. That star is called Antares and it is seen as the “heart of the scorpion”.

Sagittarius was seen as a centaur in ancient mythologies. It contains an asterism, or a smaller star picture, within it. Look for the group of stars that resemble a teapot. As part of the centaur, the “teapot” is the bow and arrow that Sagittarius holds and his arrow is aimed straight at the “heart of the scorpion”, or Antares. But as a teapot, it appears that steam is rising from its spout and spreading northward across the night sky. If you are in a dark enough location, you can see this steam, even if it just looks like a little streak of hazy cloud. That is the Milky Way stretching across the summer night sky.

Bootes looks like a diamond-shaped kite not too far past the curved handle of the Big Dipper. It has a bright star called Arcturus. This star is used to help us find Spica in the constellation Virgo. The saying goes, “Follow the arc to Arcturus, then speed on to Spica.” If you follow the arc of the Big Dipper’s handle, it points to Arcturus in the constellation Bootes. If you head straight to the south from Arcturus, you’ll reach the bright star of Spica. This can help you locate Virgo if you’re having trouble finding her.

Hercules represents the Greek and Roman mythological figure and appears as an imperfect square in the night sky to the east of Bootes. It has no prominent stars.

Cygnus is a swan and he appears to be swimming through the stream of the Milky Way. His brightest star, Deneb, is at his tail. He has an outstretched neck as he swims toward Sagittarius.

The Summer Triangle is not a constellation. Instead, it is three stars from three neighboring constellations that form a large, beautiful triangle in the summer night sky. Connect Deneb in Cygnus, Altair in Aquila, and Vega in Lyra to see it. The Milky Way runs right through the center of the Summer Triangle.