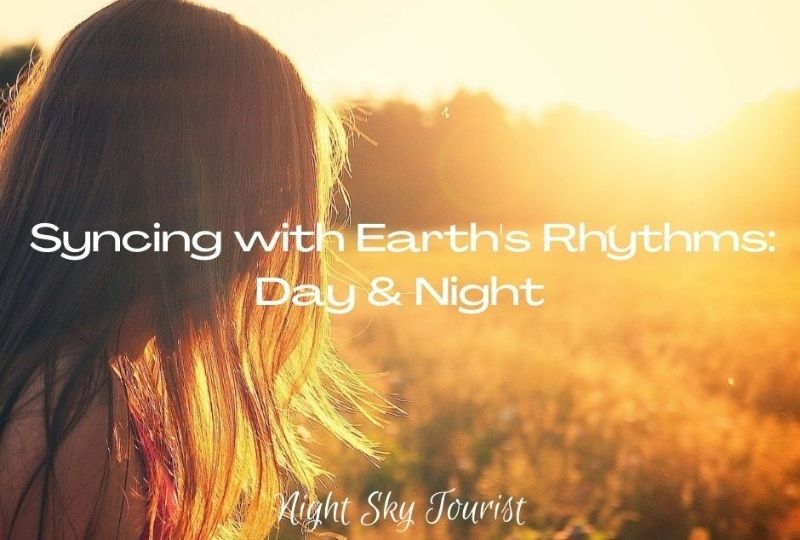 In this three-part series, we dive into Earth’s various rhythms and how they impact our lives. Most people live busy, always-on lives with habits that disconnect them from those rhythms. That disconnect impacts our health and well-being in numerous ways.

Sunrise. Sunset. Morning. Night. The most basic rhythm on Earth comes with the blazing Sun rising in the East and setting in the West. In astronomical terms, it is caused by a single rotation of the Earth over the course of 24 hours, or 86,400 seconds.

This cycle is so consistent and repetitive that we likely don’t give much thought to it. We roughly fall into sync with it. And I say roughly because our modern lives allow us to bypass this natural rhythm to an extent, and the consequences have been harmful.

Scientists have come up with two wonderful terms to explain the science behind this daily rhythm.

Don’t freak out over the unusual terms. They are quite simple to understand.

A circadian rhythm, or circadian cycle, is a natural, internal process that regulates our sleep-wake cycle during the 24 hours it takes for the Earth to make one turn. The rhythm is set by an internal circadian clock.

The word circadian is made up of two Latin words: circa means “around” and diem means “day”. So we could also call it a daily rhythm or cycle.

It is called an internal clock because it operates on its own without the need for external  or environmental influences.

However, the circadian rhythm adjusts to the local environment based on external cues. These cues are called zeitgebers, a German word that means “time givers”. What zeitgebers influence our internal circadian rhythms? Sunlight, food, noise, and interaction with others.

In other words, your body is rooted in Earth’s 24-hour cycle and cannot escape it. But environmental factors can impact your ability to stay in sync with that rhythm and keep you in good physical and mental health.

What would it look like to live in sync with Earth’s rhythms of day and night? Imagine you are on a camping trip with your family or friends. On this camping trip, you have no access to internet, electricity, watches or calendars. It’s just you and nature.

Multiple studies look at what happens to people in these camping environments. It only takes a couple of days for the internal clock to get in sync with the natural daylight and darkness pattern. People experience an earlier release of melatonin, the “sleep hormone”, by as much as two hours. Their melatonin levels wane earlier in the morning, too, bringing their sleep closer to the natural timing of sunrise and sunset.

Check out THIS ARTICLE to read more about one of these studies. It’s a brief but fascinating article.

TOO LITTLE AND TOO MUCH LIGHT

When we spend our daytime hours indoors, whether it is in our homes, in an office, or some other indoor venue, our exposure to sunlight is greatly reduced.

For example, as I sit in my home office typing this article, my Light Meter app on my smartphone reads 49 Lux. Even if I stand against my large living room window, the meter moves up to 2,469 Lux. When I step outside into the direct sunlight at 9:45 AM, the reading is 23,707 Lux!

A Full Moon typically has a Lux between 0.05 to 0.1. So a moonless night has now Lux. However, light pollution does impact the Lux levels at night.

Then you have to add electronics to the problem of artificial light at night. Many studies have shown that screens before bedtime disrupt sleep and cause a host of other health-related issues. It is the blue portion of the light emitted by electronics that seems to have the most harmful effects on sleep patterns. “Night Mode” is available on many devices. This setting reduces the amount of blue light emitted by the screen.

IMPACT OF GETTING OUT OF SYNC

Research has shown that circadian rhythm disruption can trigger a cascade of physical and mental disorders. In addition to causing sleep disorders, it also contributes to obesity, diabetes, and metabolic syndrome. It can lead to hypertension and arrhythmias. Artificial light at night has been linked to certain kinds of cancer, especially breast cancer. It is especially prevalent in shift workers. Reproduction disorders are also linked with circadian disruption.

Circadian disruption also plays a huge role in mood and mental health. People who live in extreme northern climates, such as Alaska, and those who live in rainy regions, such as Seattle and Portland, often struggle with Seasonal Affective Disorder. People who suffer with SAD often have normal mental health throughout most of the year, but experience varying degrees of depression during the winter.

People who do not get enough direct sunlight during the day and too much artificial light at night can experience the same depressive symptoms as those suffering from Seasonal Affective Disorder. The camping studies I referenced above have shown a significant reduction in depression for those who spend many hours outside in the bright sunlight for several days in a row.

There are numerous studies on the effects of too little sunlight during the day and too much artificial light at night. I will not attempt to share all of that here, but it is a fascinating topic for those who are interested in learning about it.

Let’s go back in time before there was electricity and artificial light. Think back to a time when the Native American tribes lived close the land and followed the cues of nature for their livelihood and well-being. What would their circadian rhythm have looked like?

In those days, their sleeping patterns would have closely followed the sunrises and sunsets. I live in Arizona, so for the indigenous people of the Southwest, that would mean starting the day by 5:00 AM in the summer and winding down for the day just after 8:30 PM. In winter, the day would begin around 7:30 AM and fade by 6:00 PM. They would certainly have slept more in the winter, which conveniently would have conserved physical energy and thereby reduced the amount of calories needed.

In today’s modern way of life, you probably work a job with consistent hours. If you work in an office, you probably arrive at 8:00 AM and head home by 5:00 PM, if you are lucky to leave that early. Then you go home and have dinner, do a few chores, and then zone out on TV until bedtime, which is probably consistently around 10:00-11:00 PM. And you maintain that schedule in spring, summer, fall, and winter. What kind of long-term impact does this have on us?

We’re going to explore the seasonal rhythms in Part 2 of this series.

NOTE: My thanks to Ted Blank, NASA Solar System Ambassador & VP of the International Dark Sky Discovery Center, for input on the section about Lux.