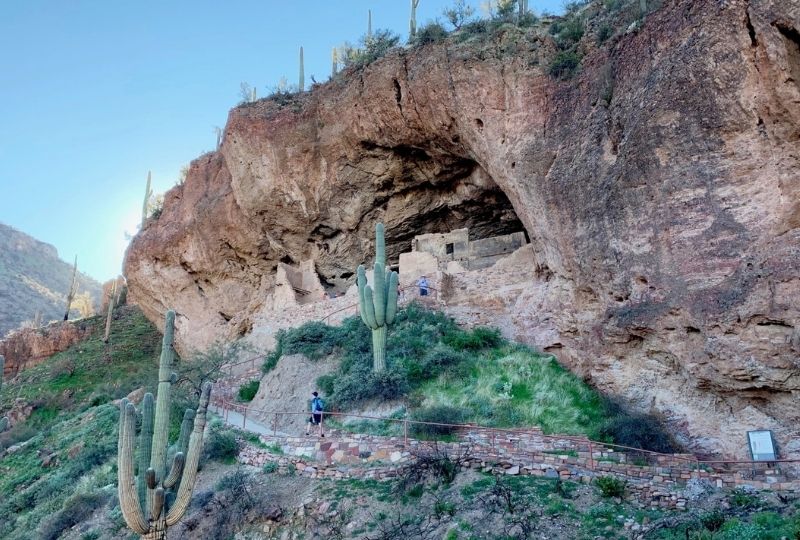 On May 7, 2019, Tonto National Monument in Arizona was designated an International Dark Sky Park. On January 25, 2020, before the pandemic, I had the wonderful opportunity to participate in their Dark Sky Designation Celebration and share about Night Sky Tourist with the guests who gathered at dusk.

The Tonto National Monument is located near central Arizona on the edge of the Sonoran Desert in the Superstition Mountains. The Salt River runs nearby with the famous Roosevelt Dam just four miles from the monument.

What draws people to this location in a somewhat remote part of the state? It’s the opportunity to walk inside the ancient cliff dwellings built by the Salado people over 700 years ago.

The Salado people farmed in the Salt River Valley where they created a thriving culture that was deeply rooted in its natural setting. They are well-known for their fine craftsmanship in architecture, pottery, textiles, and other desert-derived artifacts. Some of these can be seen in the visitor center museum.

In addition to farming, the Salado were also hunters and gatherers, finding plenty of resources in the desert around them. They gathered desert plants and cultivated cotton, corn, beans, and squash using dry farming methods. They found water in an ancient spring that still runs today.

Their pottery spread quite far throughout the Southwest. It is known for its flamboyant, monochromatic design. Their cotton crops were spun and woven into intricate textiles such as blankets and clothing. Their extensive, multi-cultural trade networks spanned the Southwest, the Pacific Coast, northern Mexico, and the Gulf of California.

The cultural identity and artistic expression of the Salado was deeply important to them and remain important to their ancestors today. According to archaeologists, the Tonto Basin was a cultural melting pot. For nearly 10,000 years, it provided a home to many diverse people. The Salado arose from Ancestral Puebloan, Ancient Sonoran Desert People, and nearby Mogollon culture who moved into the Basin.

The monument is home to two cliff dwellings. They are the best-preserved architectural evidence of the Salado culture. These cliff dwellings were built in natural caves and they used rock, sand, saguaro ribs, and water to construct walls and ceilings. These materials were readily available nearby. But pine and juniper used for roof beams had to be carried in from the surrounding mountain areas.

A one-mile paved trail will take you to the Lower Cliff Dwelling that may have housed 40-60 people in about 20 rooms. These ruins have a few partially intact original roofs. Most of the rooms have hearths which suggest that a single family lived in each room. You can see the black soot that still darkens the upper part of the cave.

Guided tours for groups of 8 are available to the Upper Cliff Dwelling where there were 32 rooms on the ground level and 8-10 rooms on a second story. The 3-mile trail has an elevation gain of about 600 feet. This dwelling had a cistern that could hold 100 gallons of water. The masonry in this structure still shows the fingerprints of the people who lived here hundreds of years ago. This area is only open for guided tours from November through April on Fridays, Saturdays, Sundays, and Mondays. Reservations are recommended.

Several indigenous tribes continue to call the area home today. These include the White Mountain, Chiricahua, Tonto Apaches, Yavapais, Pima-Maricopas, and more. Many of these tribes feel strong spiritual ties to the cliff dwellings and view them as their ancestral home.

Tonto National Park’s designation as an International Dark Sky Park in 2019 helps them protect the night sky as it would have been seen by the Salado 700 years ago. This protection prevents the park from creating light pollution that would obscure the night sky and also protects the nocturnal animals that live in the area.

This protection extends to the night sky heritage of the Salado people. Archaeologists believe the Salado used the night sky to navigate extensive trade networks throughout the Southwest as they traded the cotton they grew for pottery and shells from other areas. Observing the night sky was also important for tracking the changing seasons to determine their agricultural calendar. Protecting Tonto’s dark skies also helps archaeologists in studying the relationship the Salado had with the night sky.

In a continual celebration of the park’s dark skies, it usually offers Night Sky Programs from November through April. This is in keeping with the National Park system’s motto of “Half the Park is after Dark”.

OTHER THINGS TO DO IN THE AREA

Roosevelt Lake is located at the bottom of the hill from Tonto National Monument. It is the largest lake in Central Arizona and a favorite for people who want to enjoy water recreation. A full-service marina offers boat mooring and boat rentals. There is an RV park that hosts tents, campers, and RVs right at the lake’s edge. Or stay the night in the floating hotel room that can accommodate up to 8 people. Grab a delicious meal at Ffinch’s Waterfront Kitchen & Bar. For more information, visit https://rlmaz.com

Built between 1905-1911, this dam was once the world’s tallest masonry dam. It was built to control the flow of the Salt River, harness the water for irrigation to turn the desert into farmable land, and create hydroelectric power for the Phoenix Valley. There is an outdoor visitor’s area on the south side of the dam where you can walk down to an observation point that contains informational plaques. For more information, visit https://www.srpnet.com/water/dams/roosevelt

The Apache Trail is the drive of a lifetime. It starts at Apache Junction at US60, runs up to Roosevelt Dam, then heads east to its terminus in Globe, Arizona. It passes through rugged desert mountains and near steep canyon lakes. The narrow, winding, unpaved road is not recommended for SUVs or RVs. The ancient Anasazi used this trail to trade with the Hohokam, and other tribes may have used it to migrate between their winter and summer homes.

When plans were made to build the Roosevelt Dam, construction to turn this trail into a road began in 1903. Apache Indians provided most of the labor. They usually brought their wives and children to stay with them as they continued their way of life while building the road. For more information, visit https://www.americansouthwest.net/arizona/apache_trail/

This small community is full of rich Old West history. It is near the midpoint of the Legendary Old West Highway that runs from Apache Junction, Arizona to Lordsburg, New Mexico. Visit the Besh-Ba-Gowah Archeological Park, the Gila County Historical Museum, the Cobre Valley Center for the Arts, and the nearby Boyce Thompson Arboretum. For more information, visit http://www.globeaz.gov/