Why Earth Wobbles with a Drunken Stagger 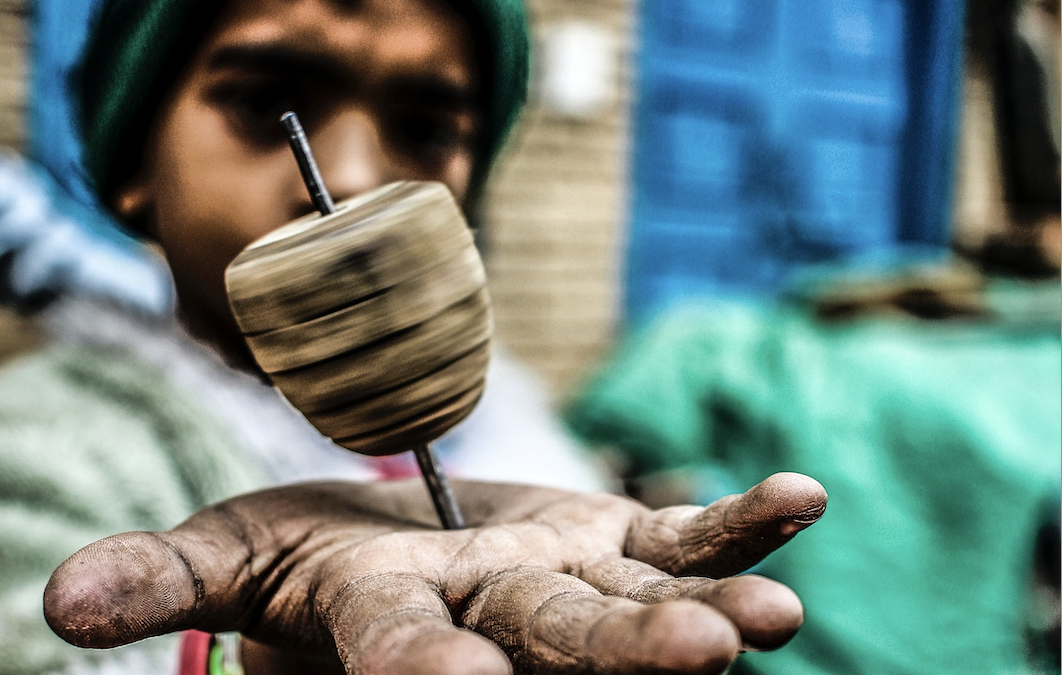 The story of Polaris, the North Star, is far more fascinating than you might suspect. You may think of it as the star in the Northern Hemisphere that doesn’t move at night and the star that guides travelers and orients us on our landscape.

Those are valid assumptions about the North Star, but it’s not the case for all of human history. 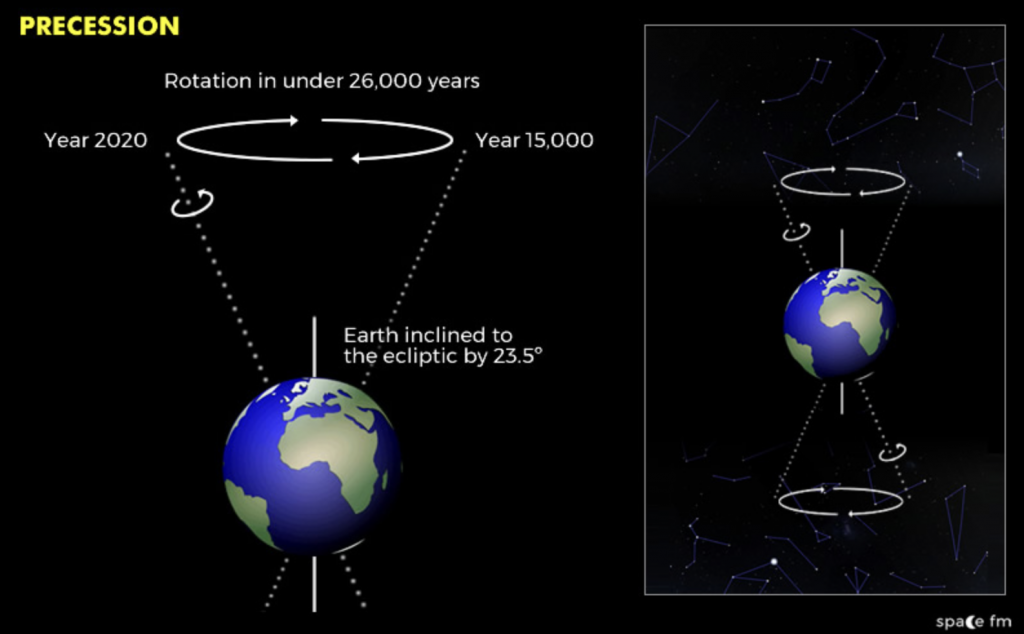 As with anything related to the cosmos, slow-motion chaos is associated with Polaris. And I think it makes the story of this celestial pole star even more interesting.

I’m sure you’ve played with a spinning top and enjoyed watching it wobble as it whizzed around in circles. As I watch, I experience the same mesmerizing feeling I get from watching the flames of a fire until the toy runs out of energy and wipes out.

While the earth is spinning on its axis, it also wobbles just like a top. The scientific term for this wobble is “precession.” The scientific explanation for precession is fascinating. But for those who want an easy explanation, it goes like this.

The sun, moon, and planets place a gravitational pull on the earth, causing it to wobble as it spins along its orbit around the sun. But it takes ages to make one complete wobble, to the tune of 25,800 years. Although that seems absurdly slow to us with infinitesimal lifespans, it isn’t very long in terms of astronomical time.

Imagine earth’s axis in your mind, like a long stick jutting light-years out into space. If you could speed up time, you’d see that earth’s axis would point to different stars over time as it wobbles.

We know that currently, our axis points at Polaris, but it’s not a precise North Star. If we extend our imaginary axis stick 433 light-years to Polaris, you’d see that it’s off by about 0.66°. As a reference point, the moon’s diameter appears as 0.52° when viewed from the earth.

But our alignment with Polars is getting closer. It will reach its closest alignment around the year 2100 at just 0.45°. By the year 4000, the North Pole will be more aligned with the star Errai at the tip of the constellation Cepheus. Then, around the year 7500, it will be closer to Alderamin, the brightest star in Cepheus.

After that, no bright stars will align with the earth’s pole until about 8,000 years from now, when it will be somewhat close to Deneb in the constellation Cygnus. A few thousand years later, it will point toward the bright Vega in the constellation Lyra, although Vega won’t be an accurate true North.

Now, let’s go back in time to the pyramid-building days of the Egyptians 5,000 years ago. At that time, our North Star was well-aligned with the star Thuban in the constellation Draco.

The Great Pyramid of Giza has shafts that open to the sky. Archaeologists once believed these were air shafts for ventilation. But in the 1960s, a discovery showed these shafts had alignments to certain stars that would have been in view during its construction. No one knows for sure the purpose of these viewing shafts.

The narrative taught to me from childhood changed when I first learned about these wobbles in the night sky. I grew up in an insulated bubble of Creationism. The Christian musical artist Carman summed up the dogma of those beliefs in his song, There is a God, and some of those words stuck with me until I learned that science didn’t support those claims.

There is a part in the first verse of that song where he sings, “A few degrees closer to the sun, we’d disintegrate / A few degrees further, we’d freeze / The axis of the earth is tilted at a perfect 23-degree angle / And it’s no mistake that it is.”

It then explains that any variation in this precision would destroy our food chain and all life on earth.

I believed these claims. And then, I learned about the 26,000-year cycle of precession. And I learned that earth’s tilt varies between 22.1 and 24.5 degrees in a cycle of about 40,000 years. I also learned that a powerful earthquake, like the 9.0 shaker in Japan, can shift the earth’s axis and even change the length of Earth days.

As I learned more about the science behind earth’s movements and position, I saw beauty in its slow-motion chaos. I found greater awe in these changes than when I thought there was precision and perfection.

In all of this chaos that unfolds over extraordinarily long periods, compared to our short lifetimes, the earth has been able to sustain life without precision. Given these long timespans of change, life on earth is remarkably adaptable, but it’s not infinitely adaptable to sudden enormous change. We know this from our understanding of the possible asteroid impact that probably wiped out the dinosaurs. And we’re witnessing it in our lifetime as we rapidly alter our planet with excessive amounts of heat and carbon dioxide.

The more I learn about how our planet works, the more awe I have for nature. And the more I understand that I, too, am part of nature, not just living in it, the more I feel a connection and respect for it. 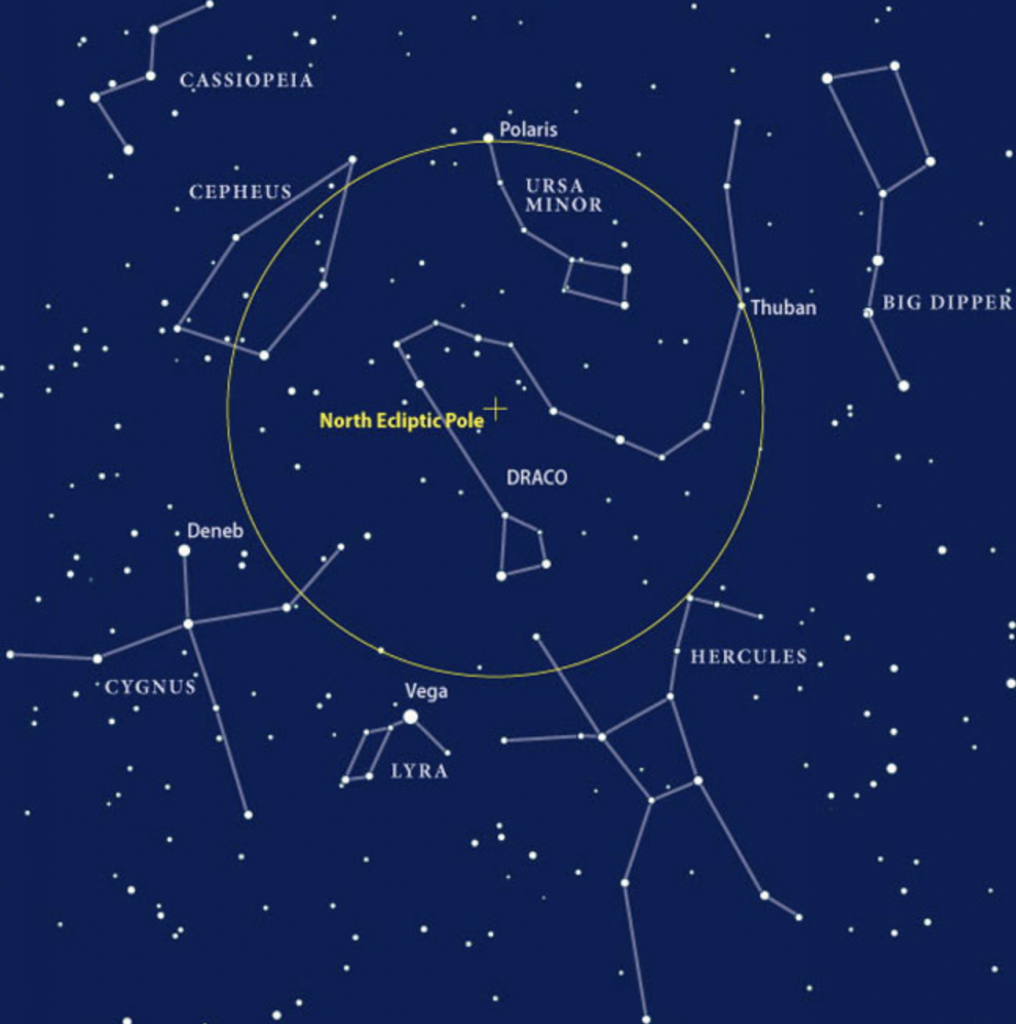 Here’s a fun activity you can do on a clear night. Find a night with no moon and try to get away from light-polluted areas.

Get your star app ready on your phone, but turn down the screen brightness to preserve your night vision.

You can also go back in time by finding Thuban in the constellation Draco.

Put together, these trace a remarkable-sized circle in the night sky.